Bessie Smith (April 15, 1894 – September 26, 1937) was an American blues singer. Nicknamed the Empress of the Blues, she was the most popular female blues singer of the 1920s and 1930s. She is often regarded as one of the greatest singers of her era and was a major influence on other jazz singers. 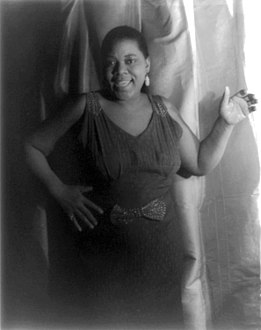 The 1900 census indicates that her family reported that Bessie Smith was born in Chattanooga, Tennessee, in July 1892. The 1910 census gives her age as 16, and a birth date of April 15, 1894 appears on subsequent documents and was observed as her birthday by the Smith family. The 1870 and 1880 censuses report three older half-siblings, but later interviews with Smith’s family and contemporaries contain no mention of them among her siblings.