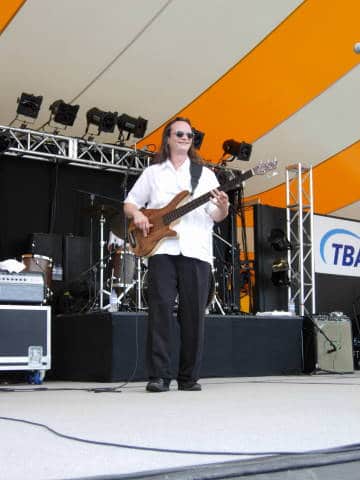 If you mix a little New Orleans R&B, blues standards, country favorites and jazz classics you will find an intriguing whistling tunesmith by the name of Chris Johnson. Chris has reawakened the ancient art of whistling, bringing it to a new level of soothing, comforting original melodies, accompanied by calming vocals and guitar. However, Chris is best known as a first-call jobber, mainly performing on bass guitar and vocals, for dozens of professional acts both locally and nationally.

Chris was transplanted to the Twin Cities from Detroit, Michigan at the tender age of one year. He grew up in Blaine where he was inundated with music by his talented grandparents John G and Francis Johnson, who only lived a mile away from his home. Grandma played guitar and auto-harp and sang; Chris remembers singing at age six in a nursing home with her. By the age of eight Chris was playing guitar and whistling with his grandma. John G, Chris’s grandfather, played trumpet and bass guitar and used to perform at Schuller’s Tavern in Golden Valley. John G also produced a 10″ 33-1/3 LP called Johnny Jay and the Elites, with two cuts on each side of the disc.

Over the following years Chris performed mostly in churches and nursing homes, which evolved into a part-time job. It was not until around 1991 that Chris joined his first successful group, Tribute to Patsy Cline with Janie Miller, bandleader and vocalist. By 1992 Chris and his wife Erika were wed and moved into their present Northside home. There they raised their two children, Jeoff and Sarah, with Chris being a full-time stay-at-home Dad.

Chris continued to strive to further his musical development through studies with Laura Flemming, Jeff Wilkomn, Terry Burns and Paul Lagos. Chris also performed with Paul Lagos (legendary jazz drummer) in the Blackburn Beech Band where Chris exclaims, “Paul taught me how to write music and understand the rudiments of jazz.”

An exciting new project for Chris’s music, particularly his whistling music, is implemented in a new film from L.A. written by Rachel Tucker and directed by Nick Lawrence called Time Expired, to be released in 2011. It’s a comedy about Randall, a terminally ill meter reader, who wants nothing more than to live out his final days in peace.

Chris currently attends Minneapolis Community and Technical College pursuing an Associates of Arts Degree, and volunteers for the Minneapolis School District in the Adult Basic Education program helping adult students with math, civics, reading and resumes, etc. When he acquires 60 credit hours, he can then apply for a paid staff position with the school district.

Chris says, “A bass player is more important about the groove and feel of the music, not how many notes are played. When you don’t really notice the bass it is doing its job. Some players are more scholarly, others have more feel. And it is important to bring both of these elements together. It feels good and is intellectually fun.” Finally he says, “Musicians must practice their rests.” (The place where you breathe and or pause in music.) “I get paid by the rest!”