Jan Garbarek (born 4 March 1947) is a Norwegian jazz saxophonist who is also active in classical music and world music.

Garbarek was born in Mysen, Norway, the only child of a former Polish prisoner of war, Czesław Garbarek, and a Norwegian farmer’s daughter. He grew up in Oslo, stateless until the age of seven, as there was no automatic grant of citizenship in Norway at the time. When he was 21, he married Vigdis. He is the father of musician and composer Anja Garbarek.

Garbarek’s sound is one of the hallmarks of the ECM Records label, which has released virtually all of his recordings. His style incorporates a sharp-edged tone, long, keening, sustained notes, and generous use of silence. He began his recording career in the late 1960s, notably featuring on recordings by the American jazz composer George Russell (such as Electronic Sonata for Souls Loved by Nature). If he had initially appeared as a devotee of Albert Ayler and Peter Brötzmann, by 1973 he had turned his back on the harsh dissonances of avant-garde jazz, retaining only his tone from his previous approach. Garbarek gained wider recognition through his work with pianist Keith Jarrett‘s European Quartet which released the albums Belonging (1974), My Song (1977) and the live recordings Personal Mountains (1979), and Nude Ants (1979). He was also a featured soloist on Jarrett’s orchestral works Luminessence (1974) and Arbour Zena (1975). 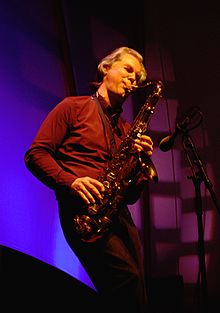 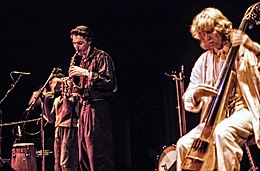 Garbarek with Eberhard Weber and Nana Vasconcelos in Vancouver, Canada 1987.

As a composer, Garbarek tends to draw heavily from Scandinavian folk melodies, a legacy of his Ayler influence. He is also a pioneer of ambient jazz composition, most notably on his 1976 album Dis a collaboration with guitarist Ralph Towner that featured the distinctive sound of a wind harp on several tracks. This textural approach, which rejects traditional notions of thematic improvisation (best exemplified by Sonny Rollins) in favour of a style described by critics Richard Cook and Brian Morton as “sculptural in its impact”, has been critically divisive. Garbarek’s more meandering recordings are often labeled as new-age music, a style generally scorned by more orthodox jazz musicians and listeners, or spiritual ancestors thereof. Other experiments have included setting a collection of poems of Olav H. Hauge to music, with a single saxophone complementing a full mixed choir; this has led to notable performances with Grex Vocalis, but not yet to recordings. In the 1980s, Garbarek’s music began to incorporate synthesizers and elements of world music. He has collaborated with Indian and Pakistani musicians such as Trilok Gurtu, Zakir Hussain, Hariprasad Chaurasia, and Nusrat Fateh Ali Khan. Garbarek is credited for composing original music for the 2000 film Kippur.