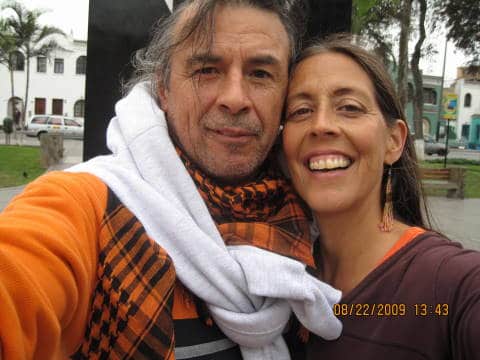 Bright smiles and a radiant glow of optimism emanate from the lovely Native-American Performance Artist, Storyteller and Puppeteer Julie Kastigar Boada. Julie categorizes her work into 3 segments: Performances, Building Puppets and Teaching. You can reach Julie at her email address [email protected]

The Performance portion of her career encompasses a wide variety of aspects. In addition to performing Puppet Shows and Storytelling she has four touring productions: The first is “Nanabosho,” the Anishinabe Coyote “Trickster” Stories with storytelling and puppetry; next is “Skeleton in the Closet,” a presentation of the Day of the Dead or Día de los Muertos (a Mexicano/Aztec holiday remembering and honoring the Ancestors); the third is “Shingebis,” the red breasted Merganser Diver Duck tales; and fourth is “On the Day You Were Born, ” a story by Debra Frasier originally presented by In the Heart of the Beast Puppet and Mask Theater (HOBT).

Julie has lived on the northside for 20 years, residing in her current location for the last 15 years. She has raised two sons, Troy and Tom, and two grandchildren, Christopher and Michael. She resides with her father, Edward, and her husband, Gustavo Boada. Gustavo is a Peruvian Artist, Puppeteer and Mask Maker.

Born in Duluth, Julie was brought to Crystal, Minnesota at age four where she lived with her two sisters and parents. Julie recalls as a young girl going to the Walker Art Center with her Dad and getting very excited about the collage artwork. Julie elaborated, “I was always drawing and painting and making dolls. I never imagined I would be a puppeteer! My sisters and I would put on shows about fairy tales and make up musicals. My Dad would bring home empty refrigerator boxes and we would make sets for our shows.” This process is similar to the HOBT practice of puppet making and float construction for such events as the 37th Annual Mayday Celebration just held on Sunday, May 1st 2011.

Julie received a BA degree from the University of Minnesota in Studio Art and American Indian Studies. She worked with sculpture, performance art and installations, usually outdoors. Julie mixed traditionally-inspired ideas with her own blending of interpretations of Earth Religions. This is truly a very powerful, passionate and creative process interweaving history with a contemporary disposition.

Julie’s introduction into Puppetry came at a time while doing her graduate work in college. She was hired by another northsider and puppeteer, Dan Polnau. He created a show called “Anaconda” and Julie worked as a Puppeteer and mask builder; she portrayed a monkey, an alligator and a fish. This production in turn launched her into working with HOBT performing “Discover America” and “Circles of 500”. Originally on staff with HOBT Julie now works as a contract artist; a good portion of her work is with HOBT.

Julie recently received a Minnesota State Arts Board grant for her creation “Hidden History”; set in the 1600’s-1800’s, it is a performance piece about the Great Lakes region during the Fur Trade, prior to the settlers occupation. She recently received a Travel Study Grant to study in Copper Canyon in Chihuahua, Mexico with the indigenous people Raramuri (what they call themselves) or the Tarahumara (the scientific term). That was a four-week excursion. This summer Julie will be doing a “Gather Stories and Community Pageant” in Fergus Falls, Minnesota, funded through the Fergus Falls Center for the Arts.

Julie expresses that “Art is a powerful tool for people to tell stories that are on the fringe. It gives voice to people who don’t ordinarily have a voice for expression.”

Share this post
← Phil Belknap “Ya Gotta do the Music ‘cus ya Love It!”Kenna-Camara Cottman “When you are Black and creating a work, Blackness is in it!” →