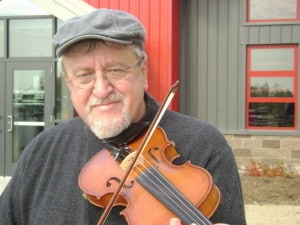 The gracious, pleasant and joyful Larry Greenstein is a life-long northsider dedicating his career to Traditional American and Celtic Fiddling, in addition to working as a Guitarist/Singer, Playwright, a Recreational Therapist and fundraiser for the Guthrie Theater. You can reach him via his web site, fiddlertogo.com, to see what he is up to. He is truly a Community Artist dedicating his career to the service of others, rather than exclusively showcasing his talents in the performance arena. I think we should have an award for every lifetime northside artist: The “Northside Lifetime Artist Achievement Award.” What do you guys think?

Larry was born on the northside at Queens Avenue Maternity Home, originally located at Glenwood and Plymouth Avenues, and lived with his parents, Joe and Maria Greenstein, and his sister Rachel. The family moved to Larry’s current residence, where he has been since 1969. He lives with his wife, Jodi, and daughter, Hannah. Jodi works as a social worker in Golden Valley.

Maria, Larry’s mother, played mandolin and sang Polish and Ukrainian music around the home, which had a strong influence on Larry’s music career. Larry recalls first playing violin around age eight or ten, while attending John Hay Elementary School, once located at Penn and Oakland. He also was taking violin lessons from Catholic nuns at St. Joseph’s Church, once located at I-94 and Plymouth Avenue. His dad, Joe, had a grocery store, the Bargain Price Market, and was known as the “Pumpkin Man. Through his generosity hundreds of free pumpkins were distributed to school kids on “Pumpkin Day” in north Minneapolis (see the full story). Joe was also an Alderman in the 5th Ward. Larry pleasantly remembers taking a bus to the grocery store after school and then walking to his violin lessons at St. Joseph’s Church.

In 1973 Larry earned a Bachelor of Arts Degree in Theater from the University of Minnesota. While attending college Larry developed his skills as a playwright, and in 1978/79 became a Jerome Foundation Resident Playwright at the Playwrights’ Center in Minneapolis for one year.

Although Larry received critical reviews for a production of an original work entitled “The Caucus” at Chimera Theater in 1981, he decided to re-direct his continuing education to Human Services; he next earned a Masters Degree in Therapeutic Recreation.

But he kept writing plays. He has had plays produced at the Lakeshore Players (”The Trotsky Rebellion”), Storytalers Children’s Theater (”The Littlest Snowflake”), and most recently the Northfield Arts Guild (”Alternate Bass Strum,” “King of the Fiddlers,” and “Homeless TV Segment.”) In October of 2011 his play, “Alternate Bass Strum”, was also featured at the Roy Arias Theater, near Times Square in New York City.

Larry worked as a Recreational Therapist through the 1980s and 90s, touring and performing on Guitar, conducting “Sing-a-Longs” in Nursing and Group Homes and Adult Day Care Centers, as well as doing one-to-one sessions for patients. Larry also directed several Theater groups for seniors.

In 2001/02 Larry created a new business called “Fiddler To Go”, a little Celtic and Old Time Fiddle music for parties, classrooms or historical events. Larry exclaimed, “If you ever need a fiddler of ole time music give me a call.”

Larry articulates, “The kind of music I play is traditional and Celtic fiddling, not bar or club music. I feel young people should get started early. And if they’re lucky enough to do this it is very rewarding. North Minneapolis youth have access to as much music and art as possible. Not just to make a living, but to enjoy Living, as much as possible.”