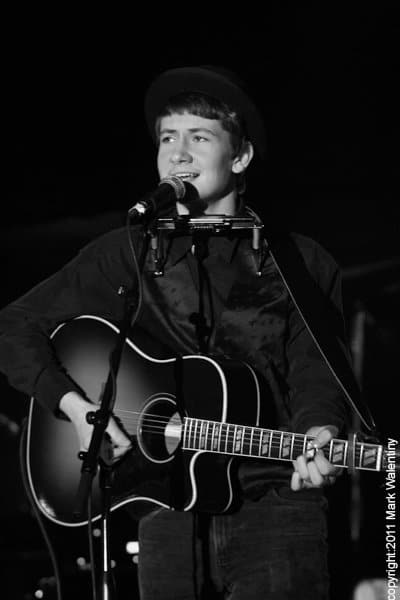 It is rare to find an artist with stellar amounts of enthusiasm, solid confidence, a calm disposition and real talent who is still a freshman in high school. This 15-year-old, 6’1½” tall young man is Luke Leblanc, otherwise know as Little Diamonds:a singer/songwriter playing guitar and harmonica and singing with a Minnesota homespun Bob Dylan-esque quality and charisma that is simply uncanny. In 2009, at the age of 13, Luke won the annual Hibbing, MN Bob Dylan competition at Zimmys Bar with an original song entitled “Song for Bob” .

He has spent nearly all of his young life on the northside cultivating a talent that is about to be unleashed on the entertainment industry in our cyberspace contemporary world. Luke has received more than 35,000 hits on one of his youtube videos already. Luke has a web site on youtube.

Luke’s dad, Duke Sopiwnik, who has raised Luke from about age two, is a powerhouse of pride and motivation in Luke’s life; Duke alone has propelled Luke into the National Music arena acquainting themselves with music legends like John McEuen (Nitty Gritty Dirt Band- with whom Luke has established a special relationship), Felix Cavaliere (Young Rascals) and Joey Molland (Badfinger). Luke and Duke are a dynamic duo of perseverance, inspiration and true grit!

Luke recalls at about age five or six, hanging out with his dad in the back yard of their northside home listening to Tennessee Ernie Ford, Hank Snow and Johnny Cash emanating from the tape deck of his dad’s car parked in the garage. Duke said he named Luke from listening to “The Weight” by the Band.

When Luke was 11 and his grandpa died, Luke inherited grandpa’s beat-up guitar. Luke then became self-taught. Luke explained, “It was easy learning the ‘chic a boom, chic a boom’ from Johnny Cash’s music.” And Luke gently expressed about his harmonica playing (which he also taught himself), “When you put on the thing around your neck it’s easy to play”. However, Luke has damaged a few harmonicas due to his gum chewing!

By age 12 Luke first performed for an open mic session at Famous Daves in Uptown. Luke wore his signature hat and vest and Duke announced “Let’s saddle up here kid and go Honky Tonkin’”. Luke played ”The Weight” and the crowd of 300 was very receptive. Luke said, “I liked the feeling of playing and being on stage”.

His next gig found him at the “Hippy Fest” at the State Theater: a national tour with 3 Dog Night, The Young Rascals, The Turtles, Denny Lane, Joey Molland, etc. Additional performances include warm-ups for the Nitty Gritty Dirt Band (Fargo, Lacrosse, and Minneapolis) and The Ozark Mountain Daredevils (Green Bay).

Luke recorded his first CD “First Rail” with 11 all-original songs at Starvu Studios engineered by Doctor Fink (formerly of Prince). Luke is planning to release another CD in March of 2011 as well.

Luke has also appeared twice on film: Luke and Duke landed a non-musical part together in “A Serious Man” by the Coen Bros. in 2008. (Look for them throwing a football on a 1950’s beach scene shot in Buffalo, MN); Luke also was filmed at the Cedar Cultural Center, Artist Quarter, Famous Daves, Southern Theater, Wilebskis and Mickey’s Diner among others for a PBS show by Elizebeth Hollenhorst.

During the end of our interview Luke was playing and singing in the background, very comforting. It’s obvious that Luke has a brilliant future ahead of him. And Luke’s humility is awe-inspiring. Luke articulated, “I liked listening to music and it bothered me that I couldn’t play it myself, so I figured out how to play. A kid picking up a guitar and figured out how to play a song.”

Share this post
← Jim Zieba “Sitting back and enjoying the music”Phil Belknap “Ya Gotta do the Music ‘cus ya Love It!” →