Frank Wellington Wess (January 4, 1922 – October 30, 2013) was an American jazz saxophonist and flautist. In addition to his extensive solo work, Wess is remembered for his time in Count Basie‘s band from the early 1950s into the 1960s. Critic Scott Yannow described him as one of the premier proteges of Lester Young, and a leading jazz flautist of his era—using the latter instrument to bring new colors to Basie’s music.

Wess was born in Kansas City, Missouri, the son of a principal father and a schoolteacher mother. He began with classical music training and played in Oklahoma in high school. He later switched to jazz on moving to Washington, D. C. and by nineteen was working with big bands. His career was interrupted by World War II although he did play with a military band in the period. After leaving the military, he joined Billy Eckstine‘s orchestra. He returned to Washington D.C. a few years afterwards and received a degree in flute at the city’s Modern School of Music. He played tenor sax with Count Basie from 1953 to 1964, doubling on flute.

Wess was considered one of the best jazz flautists of his time. From 1959 to 1964, he won the Down Beat magazine critics’ poll for flute.

He was a member of Clark Terry‘s big band from 1967 into the 1970s and played in the New York Jazz Quartet (with Roland Hanna). He also did a variety of work for TV. In 1968 he contributed to the album The Jazz Composer’s Orchestra. He played tenor and alto sax, doubling on flute throughout his career.

Huge waves are sculpted in this two-lobed nebula some 3000 light-years away in the constellation of Sagittarius. This warm planetary nebula harbours one of the hottest stars known and its powerful stellar winds generate waves 100 billion kilometres high. The waves are caused by supersonic shocks, formed when the local gas is compressed and heated in front of the rapidly expanding lobes. The atoms caught in the shock emit the spectacular radiation seen in this image. 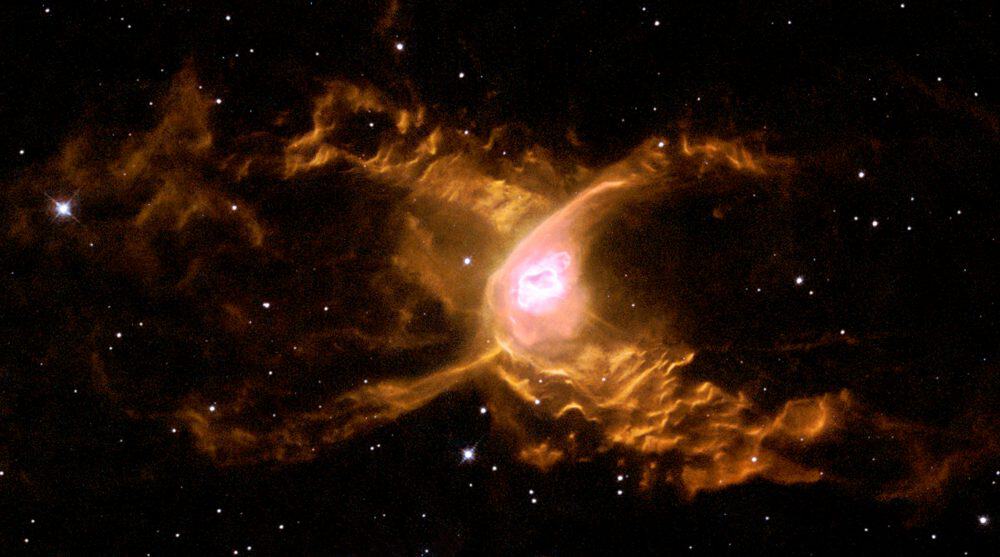 James Carter (born January 3, 1969) is an American jazz musician. He is the cousin of jazz violinist Regina Carter.

Carter was born in Detroit, Michigan, and learned to play under the tutelage of Donald Washington, becoming a member of his youth jazz ensemble Bird-Trane-Sco-NOW!! As a young man, Carter attended Blue Lake Fine Arts Camp, becoming the youngest faculty member at the camp. He first toured Europe (Scandinavia) with the International Jazz Band in 1985 at the age of 16.

On May 31, 1988, at the Detroit Institute of Arts (DIA), Carter was a last-minute addition for guest artist Lester Bowie, which turned into an invitation to play with his new quintet (forerunner of his New York Organ Ensemble) in New York City that following November at the now defunct Carlos 1 jazz club. This was pivotal in Carter’s career, putting him in musical contact with the world, and he moved to New York two years later. He has been prominent as a performer and recording artist on the jazz scene since the late 1980s, playing saxophones, flute, and clarinets.

On his album Chasin’ the Gypsy (2000), he recorded with his cousin Regina Carter, a jazz violinist.

Herbert Horatio Nichols (3 January 1919 – 12 April 1963) was an American jazz pianist and composer who wrote the jazz standard “Lady Sings the Blues“. Obscure during his lifetime, he is now highly regarded by many musicians and critics.

He was born in San Juan Hill, Manhattan in New York City, to parents from St. Kitts and Trinidad, and grew up in Harlem. During much of his life he took work as a Dixieland musician while working on the more adventurous kind of jazz he preferred. He is best known today for these compositions, program music that combines bop, Dixieland, and music from the Caribbean with harmonies from Erik Satie and Béla Bartók.

His first known work as a musician was with the Royal Barons in 1937, but he did not find performing at Minton’s Playhouse a few years later a very happy experience. The competition didn’t suit him. However, he did become friends with pianist Thelonious Monk even if his own critical neglect would be more enduring.

The Cosmos with M42

The Great Nebula in Orion is an intriguing place. Visible to the unaided eye, it appears as a small fuzzy patch in the constellation of Orion. But this image, an illusory-color four-panel mosaic taken in different bands of infrared light with the Earth orbiting WISE observatory, shows the Orion Nebula to be a bustling neighborhood of recently formed stars, hot gas, and dark dust. The power behind much of the Orion Nebula (M42) is the stars of the Trapezium star cluster, seen near the center of the featured image. The orange glow surrounding the bright stars pictured here is their own starlight reflected by intricate dust filaments that cover much of the region. The current Orion Nebula cloud complex, which includes the Horsehead Nebula, will slowly disperse over the next 100,000 years. 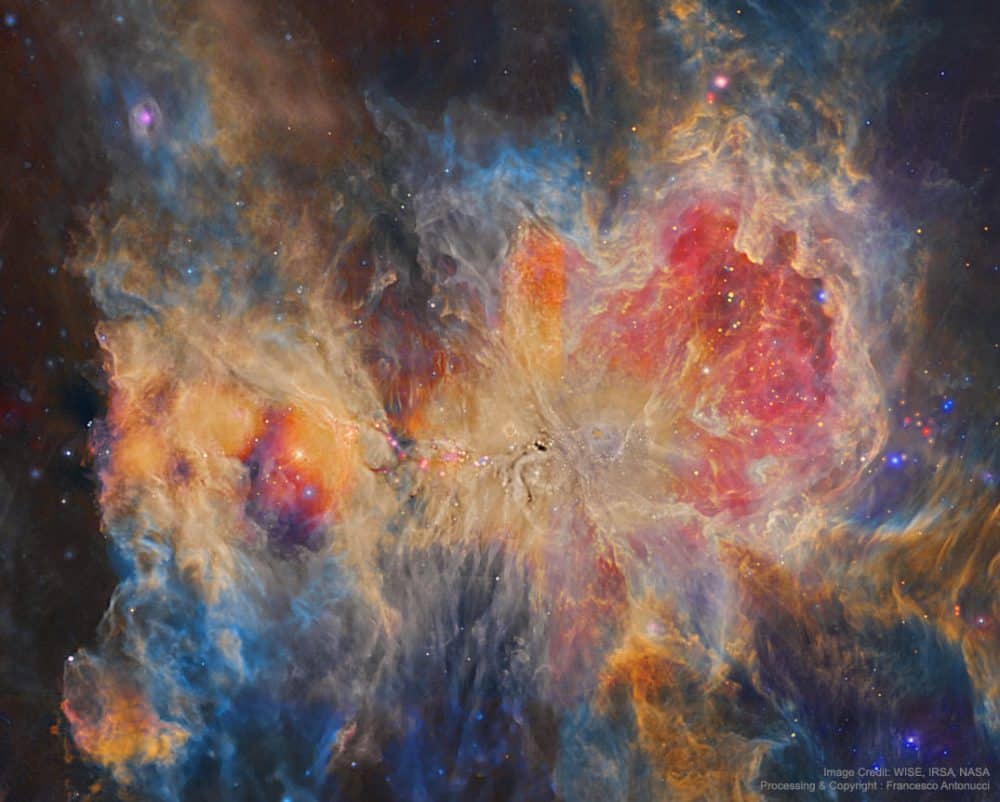 Troy Andrews (born January 2, 1986), also known by the stage name Trombone Shorty, is an American musician, producer, actor and philanthropist from New Orleans, Louisiana. He is best known as a trombone and trumpet player but also plays drums, organ, and tuba. He has worked with some of the biggest names in rock, pop, jazz, funk, and hip hop. Andrews is the younger brother of trumpeter and bandleader James Andrews and the grandson of singer and songwriter Jessie Hill. Other musical family members are cousins Glen David Andrews and the late Travis “Trumpet Black” Hill. Andrews began playing trombone at age four, and since 2009 has toured with his own band, Trombone Shorty & Orleans Avenue.

Troy Andrews was born in New Orleans and grew up in the Tremé neighborhood. Troy graduated in 2004 from Warren Easton High School. At the age of 4, he appeared onstage with Bo Diddley at the New Orleans Jazz & Heritage Festival. He participated in brass band parades as a child, becoming a bandleader by the age of six. In his teens, he was a member of the Stooges Brass Band. He attended the New Orleans Center for Creative Arts (NOCCA) along with fellow musician Jon Batiste.

Little Smokey Smothers (January 2, 1939 – November 20, 2010) was an African-American Chicago blues guitarist and singer. His elder brother was the bluesman Otis “Big Smokey” Smothers (died 1993), with whom he was sometimes confused.

Albert Abraham “Abe” Smothers was born in Tchula, Mississippi, learned to play the guitar at the age of 15, and relocated to Chicago two years later.He soon appeared on stage, playing with Arthur “Big Boy” Spires, Magic Sam, Otis Rush and Lazy Bill Lucas. In 1958 he joined up with Howlin’ Wolf, and he accompanied Wolf in a recording session for Chess Records the following year. Tracks Smothers contributed to include “I’ve Been Abused”, “Howlin’ for My Darling”. and “Mr. Airplane Man”

Daily Roots with the Heptones

The Cosmos with M104

This floating ring is the size of a galaxy. In fact, it is a galaxy — or at least part of one: the photogenic Sombrero Galaxy, one of the largest galaxies in the nearby Virgo Cluster of Galaxies. The dark band ofdust that obscures the mid-section of the Sombrero Galaxy in optical light actually glows brightly in infrared light. The featured image, digitally sharpened, shows the infrared glow, recently recorded by the orbiting Spitzer Space Telescope, superposed in false-color on an existing image taken by NASA’s Hubble Space Telescope in optical light. The Sombrero Galaxy, also known as M104, spans about 50,000 light years across and lies 28 million light years away. M104 can be seen with a small telescope in the direction of the constellation Virgo. 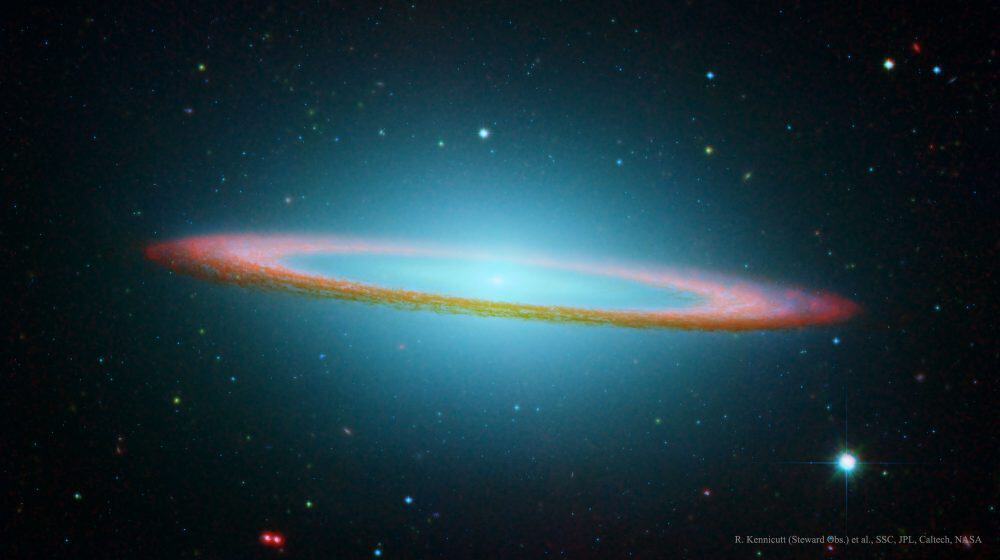 Brooklyn-based musician Brian Prunka was already an accomplished jazz guitarist in New Orleans when a series of events led him to become a beginner again, learning the oud (Arabic fretless lute) and Arabic music from the ground up. Fifteen years later, he is the leader of Nashaz, a group that finds unexpected kinship between jazz and traditional Arabic music, garnering praise and support from Arabic music luminaries like Simon and Najib Shaheen, Youssef Kassab, and Ray Rashid in response to their recently released self-titled album (www.nashazmusic.com). The journey took him from New Orleans to Brooklyn, and eventually to Haifa and Ramallah, in the process finding his own voice with an authenticity that has won him respect within the Arabic music community, whether performing with Simon Shaheen’s Qantara, Zikrayat, or the New York Arabic Orchestra. The upcoming Nashaz concert November 9th at Alwan for the Arts, an Arabic cultural center in lower Manhattan that is known for its presentation of renowned musicians from the Arab world, promises to be an intimate event celebrating the recent CD release among their friends and peers in the NY community of Arabic musicians and music lovers.

Milton “Bags” Jackson (January 1, 1923 – October 9, 1999) was an American jazz vibraphonist, usually thought of as a bebop player, although he performed in several jazz idioms. He is especially remembered for his cool swinging solos as a member of the Modern Jazz Quartet and his penchant for collaborating with several hard bop and post-bop players.

A very expressive player, Jackson differentiated himself from other vibraphonists in his attention to variations on harmonics and rhythm. He was particularly fond of the twelve-bar blues at slow tempos. He preferred to set the vibraphone‘s oscillator to a low 3.3 revolutions per second (as opposed to Lionel Hampton‘s speed of 10 revolutions per second) for a more subtle tremolo. On occasion, Jackson sang and played piano professionally.

Jackson was born on January 1, 1923 in Detroit, Michigan, the son of Manley Jackson and Lillie Beaty Jackson. Like many, he was surrounded by music from an early age, particularly that of religious meetings: “Everyone wants to know where I got that funky style. Well, it came from church. The music I heard was open, relaxed, impromptu soul music” (quoted in Nat Hentoff’s liner notes to Plenty, Plenty Soul). He started on guitar when he was seven, then on piano at 11.

Gaillard was noted for his comedic vocalese singing and word play in his own constructed language called “Vout-o-Reenee”, for which he wrote a dictionary. In addition to English, he spoke five languages (Spanish, German, Greek, Arabic, and Armenian) with varying degrees of fluency.

He rose to prominence in the late 1930s with hits such as “Flat Foot Floogie (with a Floy Floy)” and “Cement Mixer (Put-Ti-Put-Ti)” after forming Slim and Slam with Leroy Eliot “Slam” Stewart. During World War II, Gaillard served as a bomber pilot in the Pacific. In 1944, he resumed his music career and performed with notable jazz musicians such as Charlie Parker, Dizzy Gillespie, and Dodo Marmarosa.

In the 1960s and 1970s, he acted in films—sometimes as himself—and also appeared in bit parts in television series such as Roots: The Next Generations.

In the 1980s, Gaillard resumed touring the circuit of European jazz festivals. He followed Dizzy Gillespie’s advice to move to Europe and, in 1983, settled in London, where he died on 26 February 1991, after a long career in music, film and television, spanning nearly six decades. 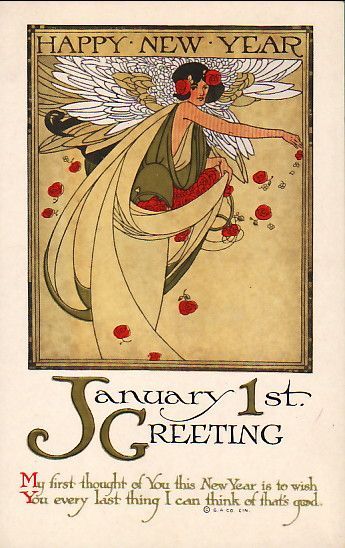 This is the first image of a celestial object taken with the newly repaired Advanced Camera for Surveys (ACS). The camera was restored to operation during the STS-125 Servicing Mission to upgrade the NASA/ESA Hubble Space Telescope.

The barred spiral galaxy NGC 6217 was photographed on 13 June and 8 July 2009, as part of the initial testing and calibration of Hubble’s ACS. The galaxy lies up to 90 million light-years away in the north circumpolar constellation Ursa Major. 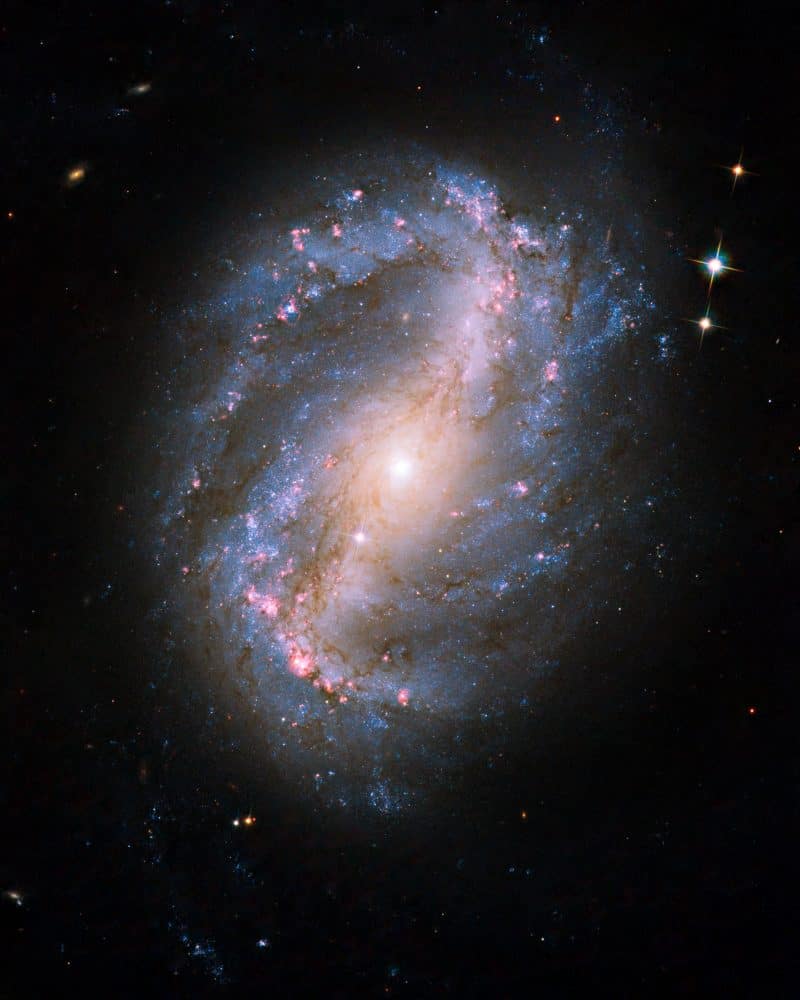