William Overton Smith (September 22, 1926 – February 29, 2020) was an American clarinetist and composer. He worked extensively in modern classical music, Third Stream and jazz, and was perhaps best known for having played with pianist Dave Brubeck intermittently from the 1940s to the early 2000s. Smith frequently recorded jazz under the name Bill Smith, but his classical compositions are credited under the name William O. Smith.

Smith was born in Sacramento and grew up in Oakland, California, where he began playing clarinet at the age of ten. He put together a jazz group to play for dances at 13, and at the age of 15 he joined the Oakland Symphony. He idolized Benny Goodman, but after high school, a brief cross-country tour with a dance band ended his romance for the life of a traveling jazz musician. He gave two weeks’ notice when the band reached Washington, D.C. Encouraged by an older band member to get the best education he could, Smith headed to New York.

Murray was born in Idabel, Oklahoma, where he was raised by an uncle who later died after being refused treatment at a hospital because of his race. He began playing drums at the age of nine. As a teen, he lived in a rough part of Philadelphia, and spent two years in a reformatory. In 1956, he moved to New York City, where he worked in a car wash and as a building superintendent. During this time, he played with musicians such as trumpeters Red Allen and Ted Curson, pianist Willie “The Lion” Smith, and saxophonists Rocky Boyd and Jackie McLean.

In 1959, he played for the first time with pianist Cecil Taylor and, according to Murray, “[f]or six years all the other things were wiped from my mind…” “With Cecil, I had to originate a complete new direction on drums.” Murray stated: “We played for about a year, just practicing, studying — we went to workshops with Varèse, did a lot of creative things, just experimenting, without a job.” In 1961, Murray made a recording with Taylor’s group that was released under the auspices of Gil Evansas one side of Into the Hot.

NGC 4565 (also known as the Needle Galaxy or Caldwell 38) is an edge-on spiral galaxy about 30 to 50 million light-years away in the constellation Coma Berenices. It lies close to the North Galactic Poleand has a visual magnitude of approximately 10. It is known as the Needle Galaxy for its narrow profile. First recorded in 1785 by William Herschel, it is a prominent example of an edge-on spiral galaxy. 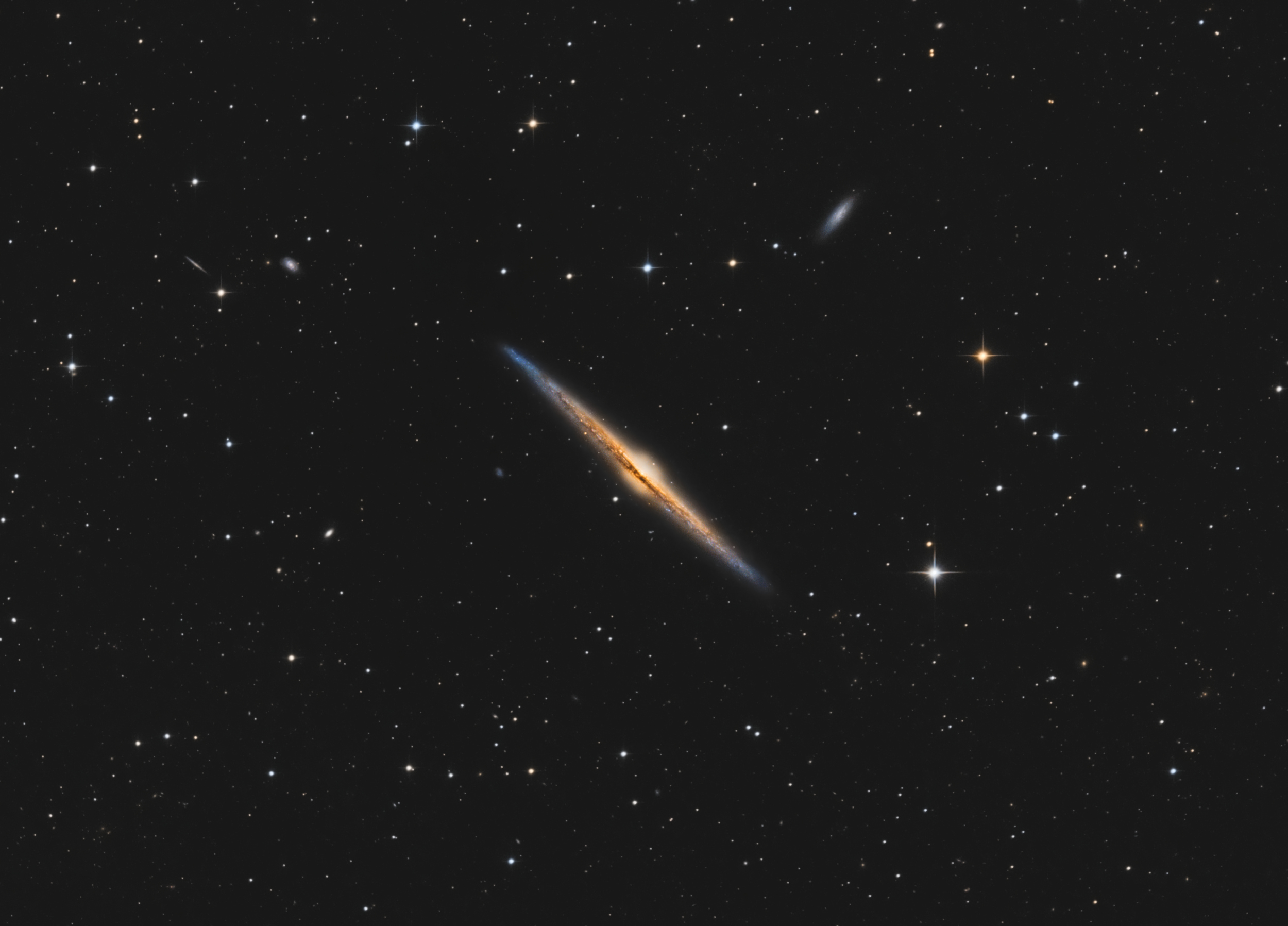 Leonard Norman Cohen CC GOQ (September 21, 1934 – November 7, 2016) was a Canadian singer-songwriter, poet, and novelist. His work explored religion, politics, isolation, depression, sexuality, loss, death and romantic relationships. Cohen was inducted into the Canadian Music Hall of Fame, the Canadian Songwriters Hall of Fame, and the Rock and Roll Hall of Fame. He was invested as a Companion of the Order of Canada, the nation’s highest civilian honour. In 2011, Cohen received one of the Prince of Asturias Awards for literature and the ninth Glenn Gould Prize.

Cohen pursued a career as a poet and novelist during the 1950s and early 1960s, and did not begin a music career until 1967 at the age of 33. His first album, Songs of Leonard Cohen (1967), was followed by three more albums of folk music: Songs from a Room (1969), Songs of Love and Hate(1971) and New Skin for the Old Ceremony (1974). His 1977 record Death of a Ladies’ Man, co-written and produced by Phil Spector, was a move away from Cohen’s previous minimalist sound. In 1979, Cohen returned with the more traditional Recent Songs, which blended his acoustic style with jazz, East Asian, and Mediterranean influences. Cohen’s most famous song, “Hallelujah“, was first released on his studio album Various Positions in 1984. I’m Your Man in 1988 marked Cohen’s turn to synthesized productions. In 1992, Cohen released its follow-up, The Future, which had dark lyrics and references to political and social unrest.

Cohen returned to music in 2001 with the release of Ten New Songs, which was a major hit in Canada and Europe. His 11th album, Dear Heather, followed in 2004. Following a successful string of tours between 2008 and 2013, Cohen released three albums in the final four years of his life: Old Ideas (2012), Popular Problems (2014) and You Want It Darker (2016), the last of which was released three weeks before his death. A posthumous album titled Thanks for the Dance was released in November 2019, his fifteenth and final studio album.

Born in Philadelphia, Potter had first played with Parker in 1944, in Billy Eckstine‘s band with Dizzy Gillespie, Lucky Thompson and Art Blakey.[1]

Leroy Eliot “Slam” Stewart (September 21, 1914 – December 10, 1987) was an American jazz double bass player, whose trademark style was his ability to bow the bass (arco) and simultaneously hum or sing an octave higher. He was a violinist before switching to bass at the age of 20.

Stewart was born in Englewood, New Jersey, United States and began playing string bass while attending Dwight Morrow High School. While attending the Boston Conservatory, he heard Ray Perry singing along with his violin. This gave him the inspiration to follow suit with his bass. In 1937, Stewart teamed with Slim Gaillard to form the novelty jazz act Slim and Slam. The duo’s biggest hit was “Flat Foot Floogie (with a Floy Floy)” in 1938.

Stars are forming in Lynds Dark Nebula (LDN) 1251. About 1,000 light-years away and drifting above the plane of our Milky Way galaxy, the dusty molecular cloud is part of a complex of dark nebulae mapped toward the Cepheus flare region. Across the spectrum, astronomical explorations of the obscuring interstellar clouds reveal energetic shocks and outflows associated with newborn stars, including the telltale reddish glow from scattered Herbig-Haro objects hiding in the image. Distant background galaxies also lurk on the scene, almost buried behind the dusty expanse. This alluring view spans over two full moons on the sky, or 17 light-years at the estimated distance of LDN 1251. 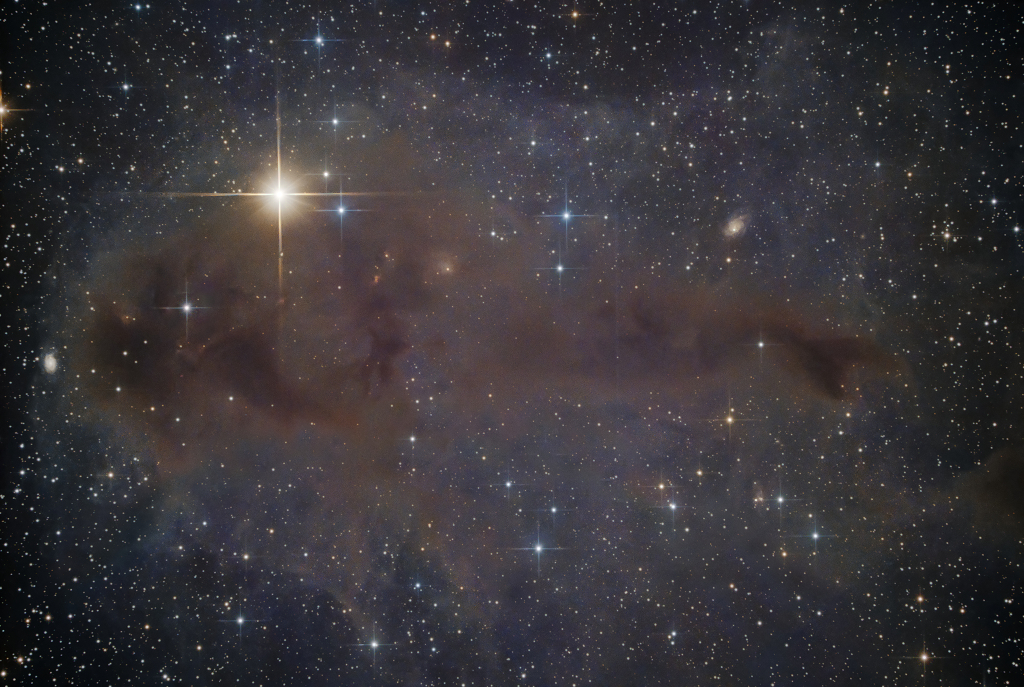 Steve Coleman (born September 20, 1956) is an American saxophonist, composer, and bandleader. In 2014, he was named a MacArthur Fellow.

Steve Coleman was born and grew up in South Side, Chicago. He started playing alto saxophone at the age of 14. Coleman attended Illinois Wesleyan University for two years,. followed by a transfer to Roosevelt University (Chicago Musical College).

Coleman moved to New York in 1978 and worked in big bands such as the Thad Jones/Mel Lewis Orchestra, Slide Hampton‘s big band, Sam Rivers‘ Studio Rivbea Orchestra, and briefly in Cecil Taylor‘s big band. Shortly thereafter, Coleman began working as a sideman with David Murray, Doug Hammond, Dave Holland, Mike Brecker and Abbey Lincoln. For the first four years in New York Coleman spent a good deal of time playing in the streets and in tiny clubs with a band that he put together with trumpeter Graham Haynes, the group that would evolve into the ensemble Steve Coleman and Five Elements that would serve as the main ensemble for Coleman’s activities. In this group, he developed his concept of improvisation within nested looping structures. Coleman collaborated with other young African-American musicians such as Cassandra Wilson and Greg Osby, and they founded the so-called M-Base movement.

Born in Bedford–Stuyvesant, Brooklyn, New York, Gale grew up in a diverse household. He was of Black-American, Native-American, and British-American heritage. Gale’s grandfather was from Yorkshire, England, who moved to Barbados and met his future wife there. Gale held dual-citizenship by descent to the UK, where he spent a lot of time going back and forth to visit family and for further studies.

Gale began playing guitar at the age of 12. In high school, he visited the home of John Coltrane after school and sat in on the jam sessions, which inspired Gale’s style. Gale received his Master of Science in chemistry at Niagara University, he was also on the football team. Later, Gale was pursued by Frank Sinatra to work on the hit song “My Way”, as mentioned in Frank Sinatra’s autobiography. Gale decided to commit to a musical career full time, instead of getting his Phd in Chemistry.

Elvira “Vi” Redd (born September 20, 1928) is an American jazz alto saxophone player, vocalist and educator. She has been active since the early 1950s and is known primarily for playing in the blues style. She is highly regarded as an accomplished veteran who has performed with Count Basie, Rahsaan Roland Kirk, Linda Hopkins, Marian McPartland and Dizzy Gillespie.

Redd is the daughter of New Orleans jazz drummer and Clef Club co-founder Alton Redd and Mattie Redd (née Thomas).[3] She was born in Los Angeles. She was deeply influenced during her formative years by her father, who was one of the leading figures on the Central Avenue jazz scene. Another important musical mentor was her paternal great aunt Alma Hightower.

Foreststorn “Chico” Hamilton, (September 20, 1921 – November 25, 2013) was an American jazz drummer and bandleader. He came to prominence as sideman for Lester Young, Gerry Mulligan, Count Basie, and Lena Horne. Hamilton became a bandleader, first with a quintet featuring the cello as a lead instrument, an unusual choice for a jazz band in the 1950s, and subsequently leading bands that performed cool jazz, post bop, and jazz fusion.

Hamilton appeared in You’ll Never Get Rich (1941) as part of the backing group supporting Fred Astaire. Hamilton also performed on the soundtrack of the Bing Crosby and Bob Hope film Road to Bali (1952).

Sharpless 132 is a very faint emission type nebula on the Cepheus/Lacerta border. It lies at a degree southeast of Epsilon Cep, and has a size of about 40 arc minutes.
Sh2-132 is located at about 10400 light years in the Perseus Arm of the Milky Way , in the region of Cepheus OB1, a large, bright OB association. 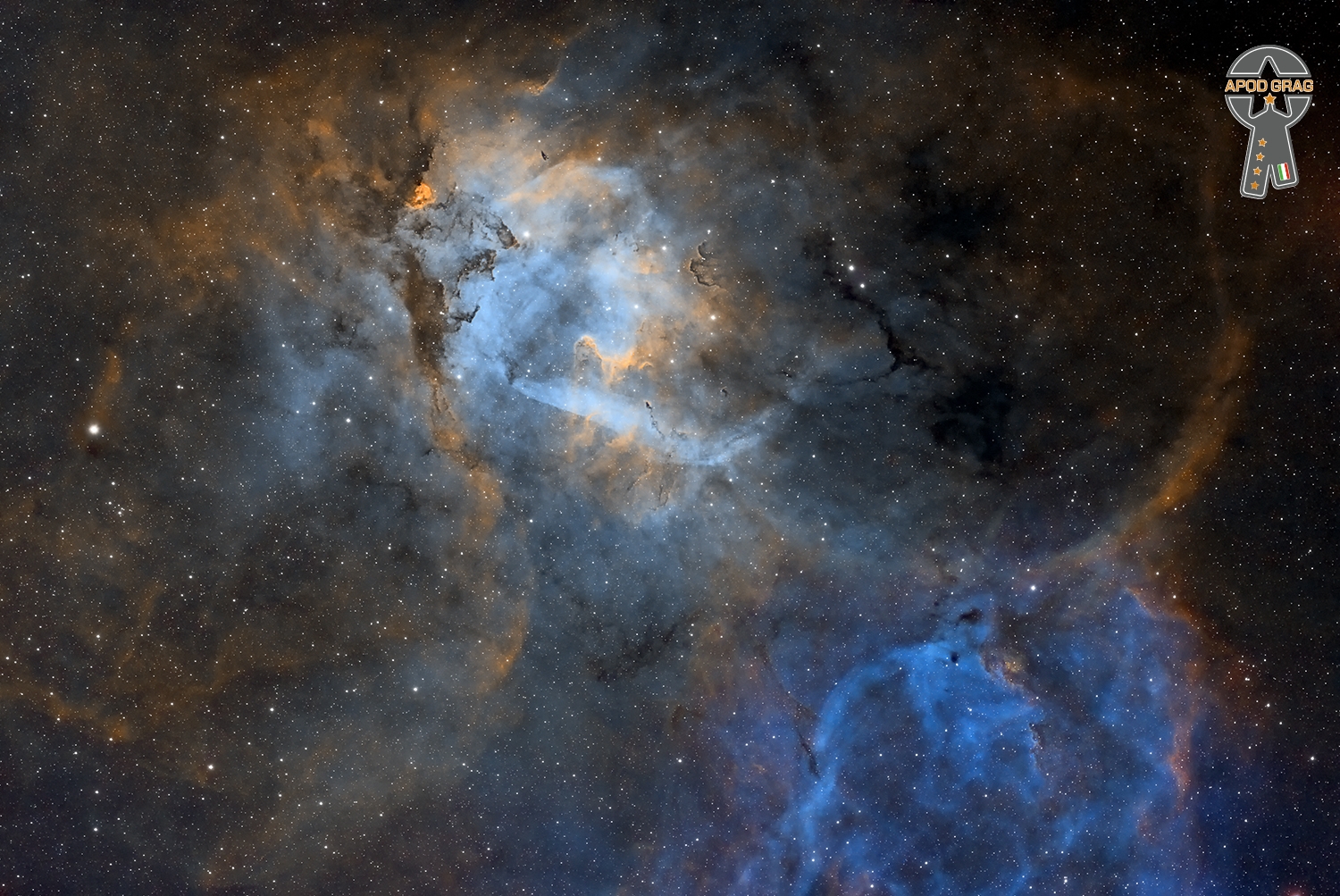 Cass Elliot (born Ellen Naomi Cohen; September 19, 1941 – July 29, 1974), widely known as Mama Cass, was an American singer, actress and member of the singing group, the Mamas and the Papas. After the group broke up, Elliot released five solo albums. In 1998, she was posthumously inducted into the Rock and Roll Hall of Fame for her work with the Mamas and the Papas.

Ellen Naomi Cohen was born in Baltimore, Maryland, on September 19, 1941, the daughter of Bess (née Levine; 1915–1994) and Philip Cohen (died 1962). All four of her grandparents were Russian Jewish immigrants. Her family was subject to significant financial stresses and uncertainties during her childhood years. Her father, involved in several business ventures throughout his life, ultimately succeeded through the development of a lunch wagon business in Baltimore that provided meals to construction workers. Her mother was a trained nurse. Elliot had a brother, Joseph, and a younger sister, Leah, who also became a singer and recording artist. Elliot’s early life was spent with her family in Alexandria, Virginia, before the family moved to Baltimore when Elliot was 15, and where they had briefly lived at the time of Elliot’s birth.

David Bromberg (born September 19, 1945) is an American multi-instrumentalist, singer, and songwriter. An eclectic artist, Bromberg plays bluegrass, blues, folk, jazz, country and western, and rock and roll. He is known for his quirky, humorous lyrics, and the ability to play rhythm and lead guitar at the same time.

Bromberg has played with many famous musicians, including Jerry Jeff Walker, Willie Nelson, Jorma Kaukonen, Jerry Garcia, Rusty Evans (The Deep) and Bob Dylan. He co-wrote the song “The Holdup” with George Harrison, who played on Bromberg’s self-titled 1972 album. In 2008, he was nominated for a Grammy Award. Bromberg is known for his fingerpicking style that he learned from Reverend Gary Davis.

Bromberg was born to a Jewish family in Philadelphia and raised in Tarrytown, New York. He attended Columbia College of Columbia University in the 1960s, studying guitar with Reverend Gary Davis during that period. He soon established himself as a solo performer and accompanist on the mid-1960s Greenwich Village folk circuit.