Úrsula Hilaria Celia Caridad Cruz Alfonso (October 21, 1925 – July 16, 2003) was a Cuban singer and the most popular Latin artist of the 20th century, gaining twenty-three gold albums during her career. She received a star in the “Walk Of Fame” in Hollywood. The U.S. President Bill Clintonawarded her the National Medal of Arts in 1994. She was renowned internationally as the “Queen of Salsa”, “La Guarachera de Cuba”, as well as “The Queen of Latin Music”.

She spent much of her career working in the United States and several Latin American countries. Leila Cobo of Billboard Magazine once said “Cruz is indisputably the best known and most influential female figure in the history of Cuban and Latin music“. She was an ambassador for the variety and vitality of the music of her native Havana, and after the Cuban revolution she became a symbol of artistic freedom for Cuban American exiles. She died of brain cancer in 2003.

Úrsula Hilaria Celia Caridad Cruz Alfonso was born on October 21, 1925 in the diverse, working-class neighborhood of Santos Suárez in Havana, Cuba, the second of four children. Her father, Simón Cruz, was a railroad stoker and her mother, Catalina Alfonso was a homemaker who took care of an extended family. Celia was one of the eldest among fourteen children- brothers, sisters, and many cousins- she often had to put the younger ones to bed by singing them to sleep.

Gillespie was a trumpet virtuoso and improviser, building on the virtuoso style of Roy Eldridge[2] but adding layers of harmonic and rhythmic complexity previously unheard in jazz. His combination of musicianship, showmanship, and wit made him a leading popularizer of the new music called bebop. His beret and horn-rimmed spectacles, his scat singing, his bent horn, pouched cheeks and his light-hearted personality provided some of bebop’s most prominent symbols.

In the 1940s Gillespie, with Charlie Parker, became a major figure in the development of bebop and modern jazz. He taught and influenced many other musicians, including trumpeters Miles Davis, Jon Faddis, Fats Navarro, Clifford Brown, Arturo Sandoval, Lee Morgan, Chuck Mangione, and balladeer Johnny Hartman.

Carlos Wesley “Don” Byas (October 21, 1912 – August 24, 1972) was an American jazz tenor saxophonist, most associated with bebop. He played with Count Basie, Duke Ellington, Art Blakey, and Dizzy Gillespie, among others, and also led his own band. He lived in Europe for the last 26 years of his life.

Byas was born in Muskogee, Oklahoma. Both of Byas’ parents were musicians. His mother played the piano, and his father, the clarinet. Byas started his training in classical music, learning to play violin, clarinet and alto saxophone, which he played until the end of the 1920s.

Benny Carter, who played many instruments, was his idol at this time. Byas started playing in local orchestras at the age of 17, with Bennie Moten, Terrence Holder and Walter Page. He founded and led his own college band, Don Carlos and His Collegiate Ramblers, during 1931-32, at Langston College, Oklahoma.

Byas switched to the tenor saxophone after he moved to the West Coast and played with several Los Angeles bands. In 1933, he took part in a West coast tour of Bert Johnson’s Sharps and Flats. He worked in Lionel Hampton‘s band at the Paradise Club in 1935 along with the reed player and arranger Eddie Barefield and trombonist Tyree Glenn. He also played with Buck Clayton, Lorenzo Flennoy and Charlie Echols.

Not a Falcon 9 rocket launch after sunset, the Cat’s Eye Nebula (NGC 6543) is one of the best known planetary nebulae in the sky. Its haunting symmetries are seen in the very central region of this composited picture, processed to reveal an enormous but extremely faint halo of gaseous material, over three light-years across. Made with data from ground- and space-based telescopes it shows the extended emission which surrounds the brighter, familiar planetary nebula. Planetary nebulae have long been appreciated as a final phase in the life of a sun-like star. But only more recently have some planetaries been found to have halos like this one, likely formed of material shrugged off during earlier active episodes in the star’s evolution. While the planetary nebula phase is thought to last for around 10,000 years, astronomers estimate the outer filamentary portions of this halo to be 50,000 to 90,000 years old. 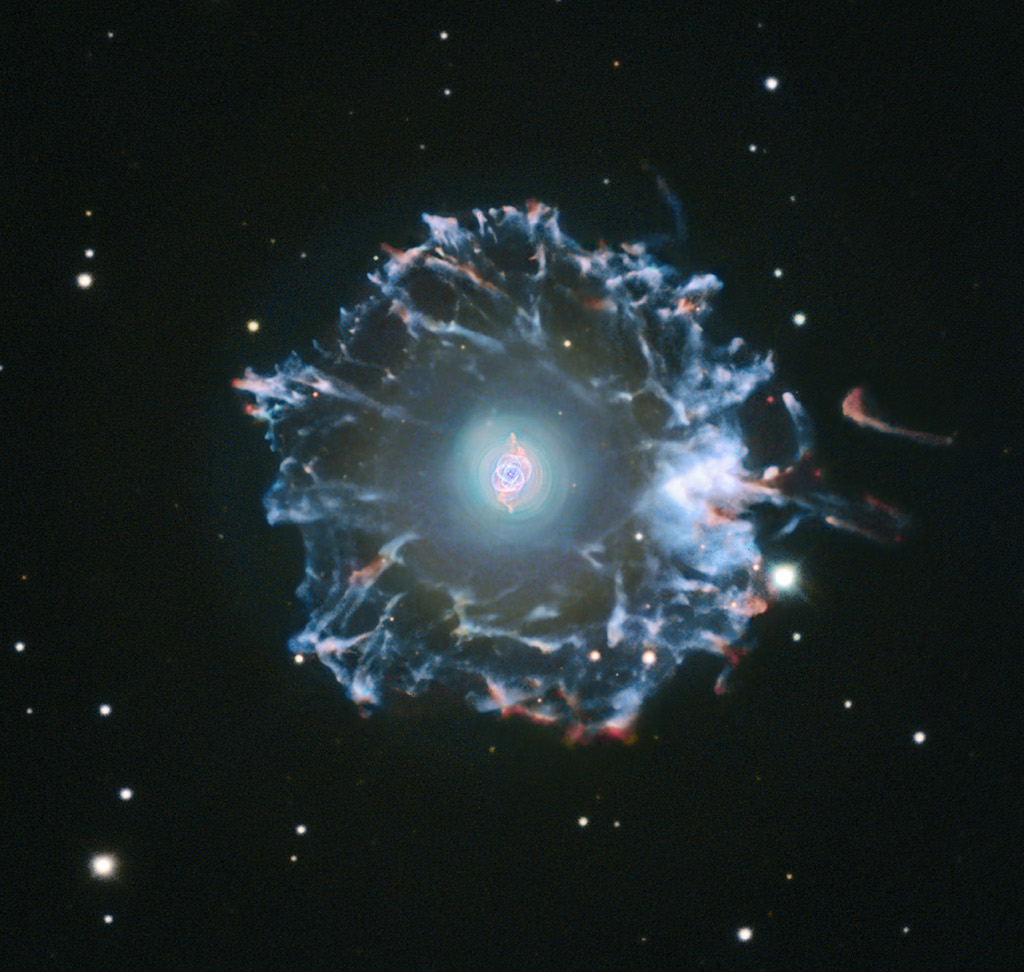 Thomas Earl Petty (October 20, 1950 – October 2, 2017 Gainesville, FL) was an American singer-songwriter, multi-instrumentalist, record producer, and actor. He was the lead singer of Tom Petty and the Heartbreakers, formed in 1976. He previously led the band Mudcrutch. He was also a co-founder of the late 1980s supergroup the Traveling Wilburys.

Petty recorded a number of hit singles with the Heartbreakers and as a solo artist. In his career, he sold more than 80 million records worldwide, making him one of the best-selling music artists of all time. He and the Heartbreakers were inducted into the Rock and Roll Hall of Fame in 2002. Petty died on October 2, 2017, one week after the completion of the Heartbreakers’ 40th anniversary tour.

Eddie Harris (October 20, 1934 – November 5, 1996 Chicago) was an American jazz musician, best known for playing tenor saxophone and for introducing the electrically amplified saxophone. He was also fluent on the electric piano and organ. His best-known compositions are “Freedom Jazz Dance”, recorded and popularized by Miles Davis in 1966, and “Listen Here.”

Harris was born and grew up in Chicago. His father was originally from Cuba, and his mother from New Orleans. Like other successful Chicago musicians, including Nat King Cole, Dinah Washington, Clifford Jordan, Johnny Griffin, Gene Ammons, Julian Priester, and Bo Diddley (among others), young Eddie Harris studied music under Walter Dyett at DuSable High School. He later studied music at Roosevelt University, by which time he was proficient on piano, vibraphone, and tenor saxophone. While in college, he performed professionally with Gene Ammons.

After college, Harris was drafted into the United States Army and while serving in Europe, he was accepted into the 7th Army Band, which also included Don Ellis, Leo Wright, and Cedar Walton.

William “Willie” Jones, Jr. (October 20, 1929 – April 1991) was a jazz drummer. He is known for playing and recording with Thelonious Monk, Elmo Hope, and Charles Mingus.

Jones was born in New York on October 20, 1929. He mainly taught himself to play the drums, and played left handed.He played and recorded with pianist Thelonious Monk in 1953, including on the album Thelonious Monk and Sonny Rollins. This recording, on November 13, was Jones’ first. He also appeared with Monk on the television program The Tonight Show, on June 10, 1955.[2]:187 Jones was sideman for another pianist’s recording in 1955 – Elmo Hope‘s Meditations;[3]:723 and for Randy Weston‘s The Modern Art of Jazz by Randy Weston in the following year. In 1956 Jones had a two-week engagement with Monk in Philadelphia. Jones also played with Kenny Dorham, J. J. Johnson, Charlie Parker, and Cecil Payne in the mid-1950s.

In 1955–56 Jones was part of Charles Mingus‘ Jazz Workshop, and was the drummer in the bassist’s band that recorded Pithecanthropus Erectus, which helped develop a freer form of group improvisation. Jones was tenor saxophonist Lester Young‘s drummer from late 1956 to early 1959. In 1961, Jones played on Sun Ra‘s The Futuristic Sounds of Sun Ra. After this, nothing is known about Jones, and his date of death was taken from social security records. These associations – with the traditional Young and the avant-garde Sun Ra – illustrated Jones’ versatility.

Widely recognized as a pivotal figure in early jazz, Morton was jazz’s first arranger, proving that a genre rooted in improvisation could retain its essential spirit and characteristics when notated. His composition “Jelly Roll Blues“, published in 1915, was the first published jazz composition. Morton also wrote the standards “King Porter Stomp“, “Wolverine Blues“, “Black Bottom Stomp“, and “I Thought I Heard Buddy Bolden Say”, the last a tribute to New Orleans musicians from the turn of the 20th century.

Morton’s claim to have invented jazz in 1902 aroused resentment. The jazz historian, musician, and composer Gunther Schuller says of Morton’s “hyperbolic assertions” that there is “no proof to the contrary” and that Morton’s “considerable accomplishments in themselves provide reasonable substantiation”. Alan Lomax, who recorded extensive biographical interviews of Morton at the Library of Congress in 1938, did not agree that Morton was an egoist:

In being called a supreme egotist, Jelly Roll was often a victim of loose and lurid reporting. If we read the words that he himself wrote, we learn that he almost had an inferiority complex and said that he created his own style of jazz piano because “All my fellow musicians were much faster in manipulations, I thought than I, and I did not feel as though I was in their class.” So he used a slower tempo to permit flexibility through the use of more notes, a pinch of Spanish to give a number of right seasoning, the avoidance of playing triple forte continuously, and many other points”. –Quoted in John Szwed, Dr Jazz

Part of the Expressing Me-A Showcase of Creativity from Makers of All Abilities at MIA Minneapolis Institute of Art in the Reception Hall of the Target Wing on the 3d floor. Event is 11am-1pm 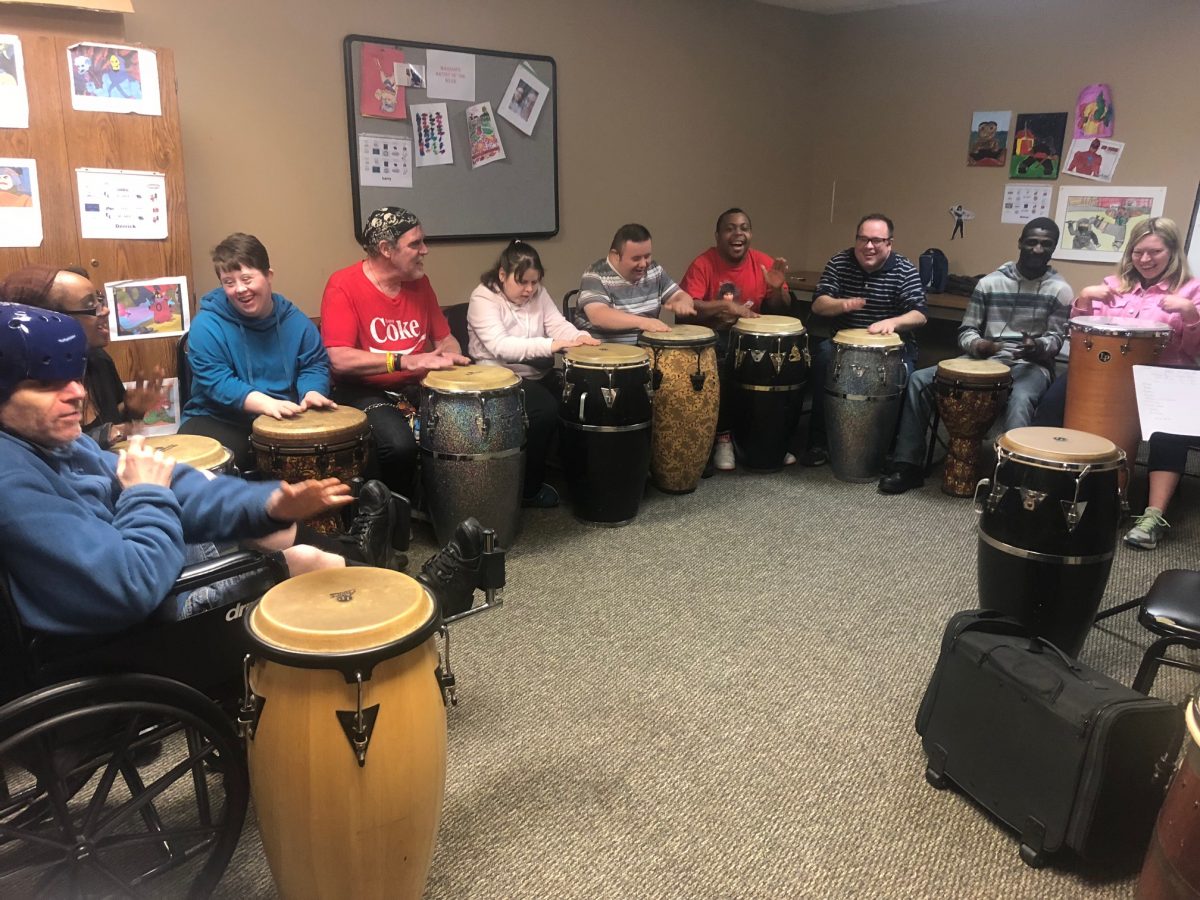 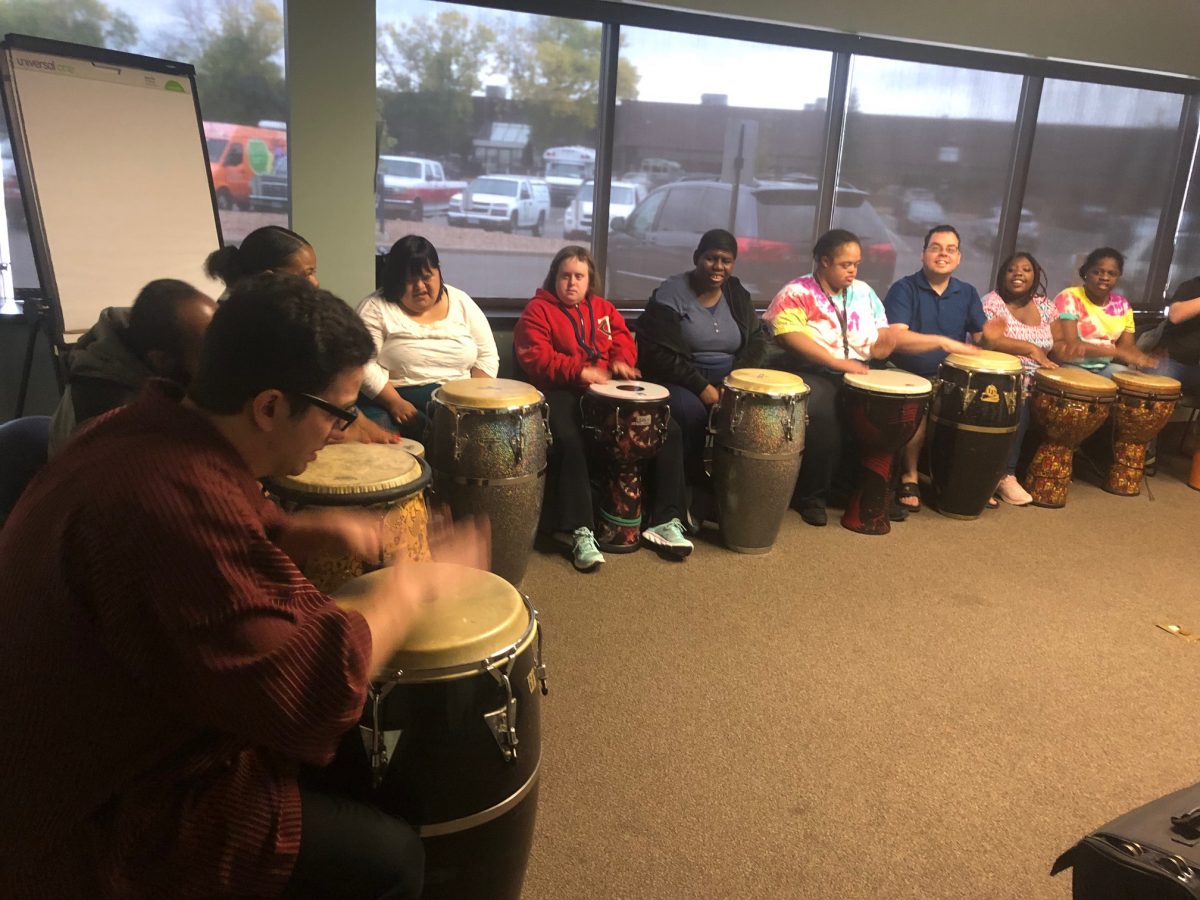 Sharpless 132 is a very faint emission nebula often overlooked by astrophotographers. It’s on the border of the constellations of Cepheus and Lacerta. It’s estimated to be about 10,000 light years away. The star field is very rich, so the nebula is almost lost amidst all the stars. 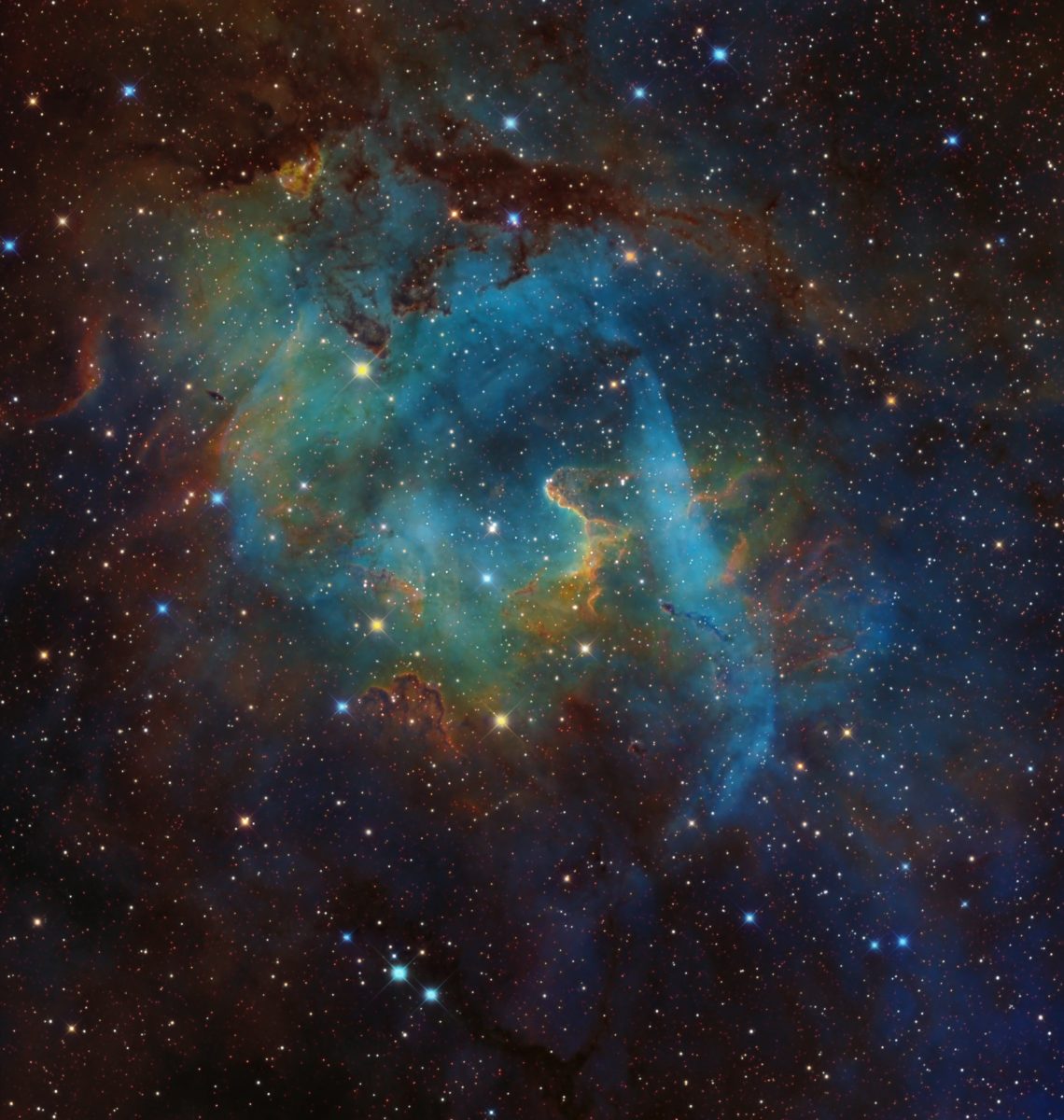 Masabumi Kikuchi was born in Tokyo in 1939, and lived his early life in World War II and post-war Japan. He studied music at the Tokyo Art College High School. After graduating, he joined Lionel Hampton‘s Japanese touring band. He died from a subdural hematoma on 6 July 2015 at a hospital in Manhasset, New York. At the time of his death, he lived in Manhattan, New York City.

Willie Lee Perryman (October 19, 1911 – July 25, 1985), usually known professionally as Piano Red and later in life as Dr. Feelgood, was an American blues musician, the first to hit the pop music charts. He was a self-taught pianist who played in the barrelhouse blues style (a loud percussive type of blues piano suitable for noisy bars or taverns). His performing and recording careers emerged during the period of transition from completely segregated “race music” to rhythm and blues, which was marketed to both white and black audiences. Some music historians credit Perryman’s 1950 recording “Rocking With Red” for the popularization of the term rock and roll in Atlanta. His simple, hard-pounding left hand and his percussive right hand, coupled with his cheerful shout, brought him considerable success over three decades.

Perryman was born on a farm near Hampton, Georgia, where his parents, Ada and Henry Perryman, were sharecroppers. He was part of a large family, though sources differ on exactly how many brothers and sisters he had. Perryman was an albino African American, as was his older brother Rufus, who also had a blues piano career as “Speckled Red”

The flamenco tango is distinct from the flamenco rumba primarily through the guitar playing. In Rumba the guitar flows more freely, whereas in Tangos the accents on beats 2, 3 & 4 are marked clearly with heavy strumming.

Prawn Nebula, IC 4628, is an emission nebula located in the Sagittarius Arm of the Milky Way, around 6000 light-years from Earth in the constellation Scorpius. It forms part of the tail of the “False Comet” anchored by the bright open cluster NGC 6231.

Esperanza Emily Spalding  (born 1984) is an American jazz bassist and singer. Spalding was raised in Portland, Oregon, and was a musical prodigy, playing violin in the Chamber Music Society of Oregon at five years old. She was later both self-taught and -trained on a number of instruments, including guitar and bass. Her proficiency earned her scholarships to Portland State University and the Berklee College of Music. In 2017 she was appointed Professor of the Practice of Music at Harvard University.[3]