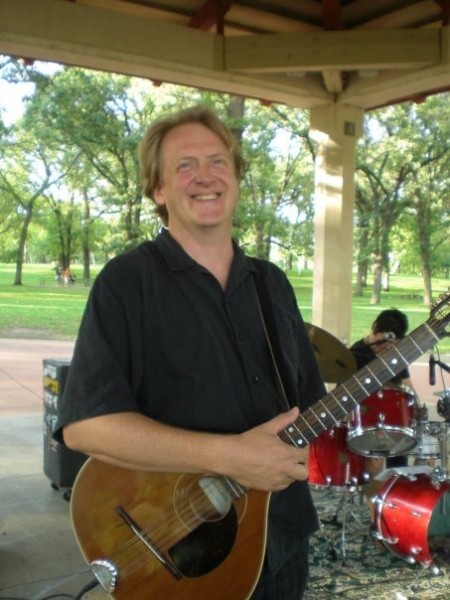 The very amiable and well-humored Scott Nieman is a musician, audio engineer, composer, former electrical engineer and computer analyst for the United Nations, and current computer integration architecture specialist. He has lived on the Northside since the mid ‘80s and continues to perform music and record music with a great amount of enthusiasm, integrity and excitement about his work. Scott was also a driving force in the mounting of the beautifully renovated Capri Theater on Broadway, donating a considerable amount of his own sound gear and innumerable hours of his creative energy and labor.

Scott was raised by a very musical family surrounded by German Polkas in Cumberland, Wisconsin and initiated his music career at the young age of six playing drums and later trombone. He eventually migrated to the Twin Cities via River Falls in pursuit of a larger and more diverse musical community.

While developing his musical interests he learned guitar and developed an interest in world music learning several intriguing stringed (mandolin-like) instruments such as the Cittern (medieval European 10-stringed), the Bouzouki (Greek), and the Yayli Tambur (Turkish with metal body). While traveling in Greece Scott heard Rebetiko music and was fascinated by this unique sound while sitting in with a local band. He also had an interest in blending cultural traditions such as Celtic and Reggae to produce a new combination of styles. As a result, Scott co-created several ensembles including the Holy Goats and the all-instrumental Seven Tribes here in the Twin Cities. His current project is Felonious Bosch producing a fusion of many cultural traditions.

In addition to his musical exploits Scott earned a BEE-Bachelors of Electrical Engineering degree from the U of W-River Falls. Scott became a pioneer in computer technology in the ‘80s working with EDI, serving in ANSI ASC X12 standards committees. He also served five solid years in a technology expert group at the United Nations to develop a “model driven architecture” to provide solutions for emerging nations and small businesses.

Another incredible accomplishment of this Northside artist was to get involved with the newly renovated Capri Theater. While attending a FLOW a few years ago (a summer event on Broadway), Scott walked into the Capri and was startled by the stunning architecture. He thought, “How can I get Involved?” and shortly thereafter became a member of the Northside Arts Collective and the Community Advisory Council in conjunction with PCYC to help develop the theater renovation. Scott became a powerful entity designing the acoustics, sound system installation and recording booth. He also implemented recycled materials, for example creating acoustic pads from cotton, Levi materials and pop bottles (for diffusion panels). After the Capri opened Scott produced 12 shows, creating an exciting, initial launch of this spectacular and revitalized theater.

I conclude with an inspiring quote from Scott Neiman: “There’s much to give back to the community, and music brings people together.”

Share this post
← Grieving Death in a Fear-Based Culture: Musical Expressions of Love and SpiritMerlin Brunkow-Bronco Keeps on Playing →
Scroll To Top