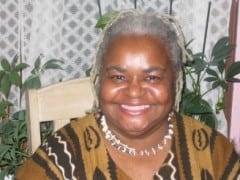 Captivating, charismatic and delightful, Nothando Zulu is the incarnation of her rich and vibrant craft of storytelling: the power of the oral tradition as practiced by African people in the Diaspora. She can articulate a narrative like nobody’s business, with such passion and vitality that it soothes the soul.

As a performance artist Nothando is best know as a master storyteller, but additionally works as an actress, monologist (solo performer) and comedian. She is also president/director of BSA, the Black Storytellers Alliance, which she founded two decades ago. She and her husband Vusumuzi Zulu have lived on the Northside for 40 years where together they nurtured four children Stephanie, Makeda, Keke and David.

Nothando grew up just outside of Franklin, Virginia on a farm nestled in the Mid-Coastal Plain. She recalled that in her small rural school, every class had an opportunity to present, in rotation, an assembly program on Fridays. Nothando insists she was very enthusiastic about the storytelling; and students were rewarded for their storytelling. Also, she was involved actively with her church.

At 17, after the passing of her mom, Nothando moved to Minneapolis to live with her brother and continue her education at Marshall High School. She attended St. Cloud State University for two years and then worked for a few years including with the postal service. Later she married and became a homemaker for several more years.

In 1976 Nothando became a founding member of the Black Theater Alliance along with Horace Bond, Philip Blackwell, Lou Bellamy of Penumbra Theater and Laurie Robeson. This organization was known for performing without props in the community and in neighborhood parks.

In 1991 the group’s name changed to Black Storytellers Alliance (BSA) and the first annual “Signifyin’ and Testifyin’ Festival” was conceived and performed in several locations locally. Last November, BSA had the honor of hosting the “In the Tradition” 28th Annual National Black Storytelling Festival. The National Association of Black Storytellers (NABS) held their Conference in Minneapolis at the Marriott City Center.

As an actress Nothando has worked with Penumbra Theater Company, At the Foot of the Mountain, the Illusion Theater and the Rarig Center at the University of Minnesota. Her performances included Heartland Louisiana by Horace Bond,The Reconstruction of Dossie Rae Hemphill by Endesha Ida Mae Holland and The First Breeze of Summer written by Leslie Lee.

Nothando also works as a comedian and created, or channels should I say, a hilarious character named “Aunt Dicey” with off-color antics similar to Moms Mabley’s. Nothando warmed up for several national acts including Sinbad and Bobby Blue Bland. At one point in our interview Nothando transformed into “Aunt Dicey” and suddenly we both started laughing hysterically in UROC (Urban Research and Outreach/Engagement Center at 2001 Plymouth Ave. N) where we met. UROC is an incredible new community resource center on the Northside. And in our ruckus they didn’t even throw us out!

Nothando’s storytelling encompasses a wide variety of subject matter: everything from Nothando’s life, to African folk tales to African/American animal stories, to historical stories of Rosa Parks and Fannie Lou Hamer, and to short stories by Zora Neale Hurston-to name a few.

Nothando is a roster artist with Compas and Young Audiences of Minnesota often working with young people, and most recently began working with Minnesota Creative Artists and Aging Network (MNCAAN) engaging the aging community.

Nothando is very passionate about engaging the community. “Help those that aren’t used to helping themselves. We must get back to the community.” Nothando gives examples, “Like the garden sharing that’s happening and we must get more self sufficient.” “I don’t separate the artist from the community, everything is circular and apart of!”

Share this post
← Chris Johnson: He Gets Paid by the RestJim Zieba “Sitting back and enjoying the music” →