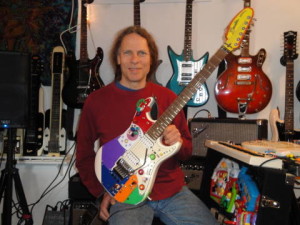 Walking into the northside studio of Phil Belknap is a maniacal excursion into Guitar mania and amazing unusual sound inventions made from toys — including the Gadgetor Guitar displayed in Phil’s pic. With an intense passion for Sci-Fi and comic books, the very delightful and light-hearted Phil Belknap is most currently know as a guitarist, lap-steel-guitar player, Farfisa organist, composer, and inventor of various sound/audio devices mostly made from toys: a composite of switches, wiring and toys producing very high-tech frequencies and ambiances.

For the last 10 years Phil has been the principal songwriter of the Big Surf Band, his most notable current project. Earlier in his adventuresome folly, with a background in gymnastics, Phil became a dazzling rope-walking, acrobatic, juggling, lariat-spinning, mandolin-playing street performer. As a solo artist he became “Flip Phillip” working with theatrical ensembles, Renaissance Fairs and other events nationally and internationally. Phil has been supplementing his income working at the Wedge Co-op for the last 20 years.

Phil and his wife Liz Knaeble have resided for 11 years in their Northside home. Liz’s roots on the northside astonishingly date back four generations to the year 1860. Liz is a child-care provider with Minneapolis Public Schools for high-school teens working to complete their education.

In the mid-70’s Phil relocated to Greeley, Colorado attending college, managing a food co-op, learning rope-walking with tips from Evan Ravitz (Evan from Heaven), doing some music and eventually working for White Wave Tofu (who spearheaded tofu in the United States) after moving to Boulder.  He then worked the Renaissance Fair in Castle Rock, Colorado where he developed his one-man act of rope-walking while juggling or playing mandolin.

One year while wintering in Austin, Texas he joined the zany antics of Troupe De Jour featuring Magical Mystical Michael and Franko the Flying Sorcerer. By 1985 Phil migrated back to the Twin Cities working with the music groups The Talkabouts, Flesh Fantasy (Billy Idol covers), Frayed Knot, Beat Curio and the Electric Arab Orchestra.

Phil is an aficianado of Surf Music, he expresses “that twangy reverb guitar with bass and drums” climaxing from ’62-’64 in Southern California. “It’s instrumental music with no singing featuring the melodies knocked out on guitar, what a great idea! “ Phil enthused. “Pipeline”, “Walk Don’t Run” and “Wipe Out” were the first tunes of Phil’s repertoire influenced by Arab/American Dick Dale (King of the Surf Guitar) and the Del-Tones, and Lynk Wray and his Ray Men (of Rawhide and Batman themes fame).

Phil also journeyed into Arabic music listening to another twangy guitar style, that of Omar Khorshid who performed with Arabic music legends Oum Kalthoum and Mohammed Abdel Wahab. While continuing his Venture, no pun intended, into the Surf and Middle Eastern genres Phil began to compose and write music implementing his 1960’s Farfisa electric organ along with his many stunning guitars, including the Fender Jazzmaster.

Big Surf is working on their fourth CD and often perform at Gasthof zur Gemutlichkeit and Marios Keller Bar in Northeast Minneapolis in between the regular polka bands. For five and a half years Big Surf had a once-a-month gig at the Hexagon Bar in Seward neighborhood that folks really looked forward to. Phil hopes to find the band another venue for their committed fans. Any ideas???

Phil insists that “Ya gotta do the music ‘cus you Love it, there isn’t always a crowd or money available. I’ve played some of the big gigs and Wow we’re having Fun! Then sometimes there’s just a few people in the house and this really tests your commitment to your art or music!”

Share this post
← “Little Diamonds” Luke Leblanc does the chic a boom, chic a boomJulie Kastigar Boada “Art is a powerful tool for people to tell stories that are on the fringe.” →