Let us honor our First Nation People today on this Thanksgiving. Especially the Wall of Forgotten Natives homeless encampment in Minneapolis. I pray one day the world will honor All People Equally, with every individual receiving the basic needs of survival and respect as Human Beings at birth; Food, Shelter, Education and Sustainability in a loving and nurturing Mother Earth.

The National Day of Mourning is an annual protest organized since 1970 by Native Americans of New England on the fourth Thursday of November, the same day as Thanksgiving in the United States. It coincides with an unrelated similar protest, Unthanksgiving Day, held on the West Coast.

The organizers consider the national holiday of Thanksgiving Day as a reminder of the democide and continued suffering of the Native American peoples. Participants in the National Day of Mourning honor Native ancestors and the struggles of Native peoples to survive today. They want to educate Americans about history. The event was organized in a period of Native American activism and general cultural protests. The protest is organized by the United American Indians of New England (UAINE). Since it was first organized, social changes have resulted in major revisions to the portrayal of United States history, the government’s and settlers’ relations with Native American peoples, and renewed appreciation for Native American culture. 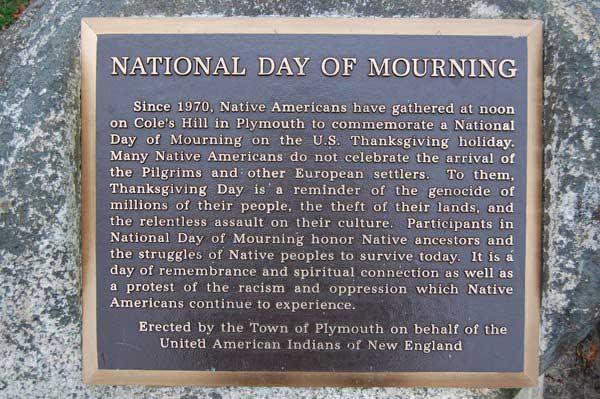