The central plane of the Milky Way is a busy place, filled with objects of all shapes, sizes, colors and classifications. The beautiful region above is just a tiny sliver of a much larger whole, called IRAS 16562-3959: it can be found in the constellation of Scorpius. IRAS, as we’ll call it from here on out, is a dense cloud of interstellar gas and dust, belonging to the small molecular cloud pictured in ruddy orange. It, in turn, is surrounded by a plethora of bright, colorful stars, providing contrast to the interstellar materials.

Of the hundreds of stars pervading the medium, one stands apart from the rest: the bright, young star pictured front and center. It’s so young, in fact, it still hasn’t yet progressed into main sequence mode. Rather, the section of the cloud that birthed it continues to collapse under the weight of its own gravity. When all is said and done, it will be about 15 times heavier than the Sun, but even that comes with its own set of problems, being that it won’t live that long, and will explode as a supernova in several millions of years

This spectacular image was put together using VISTA (an acronym for ‘Visible and Infrared Survey Telescope for Astronomy‘), a tool installed on the ESO’s Paranal Observatory. Recently, the ESO probed the region using the Atacama Large Millimeter/submillimeter Array (ALMA). It revealed that the central star — dubbed G345.4938+01.4677 — has a rather large disk of gas and dust encompassing it. Additionally, there is streams of material spewing from its surface. Things like this are not unusual when dealing with stars still in the process of forming, but theoretical models indicate that neither feature should be exhibited by stars similar to G345.4938+01.4677. 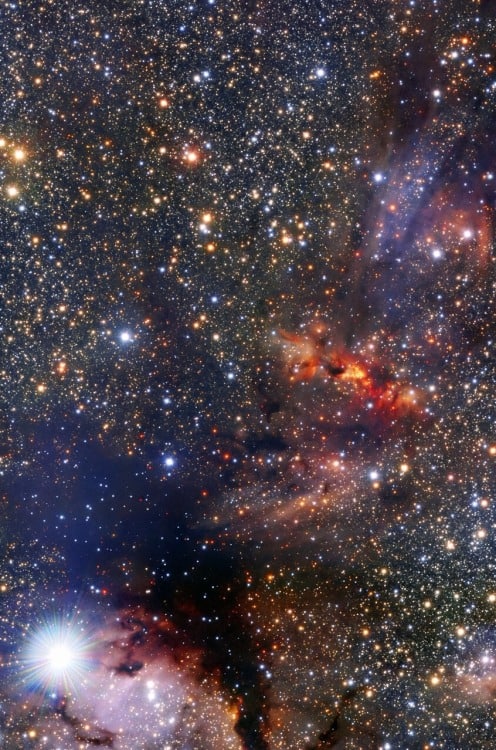