IC 342 (also known as Caldwell 5) is an intermediate spiral galaxy in the constellation Camelopardalis, located relatively close to the Milky Way. Despite its size and actual brightness, its location in dusty areas near the galactic equator makes it difficult to observe, leading to the nickname “The Hidden Galaxy”, though it can readily be detected even with binoculars. If the galaxy were not obscured, it would be visible by naked eye. The dust makes it difficult to determine its precise distance; modern estimates range from about 7 Mly to about 11 Mly. The galaxy was discovered by William Frederick Denning in 1892. It is one of the brightest in the IC 342/Maffei Group, one of the closest galaxy groups to the Local Group. Edwin Hubble first thought it to be in the Local Group, but it was later determined not to be a member.

In 1935, Harlow Shapley found that it was wider than the full moon, and by angular size the third-largest spiral galaxy then known, smaller only than the Andromeda Galaxy (M31) and the Triangulum Galaxy (M33). (Modern estimates are more conservative, giving the apparent size as one-half to two-thirds the diameter of the full moon). 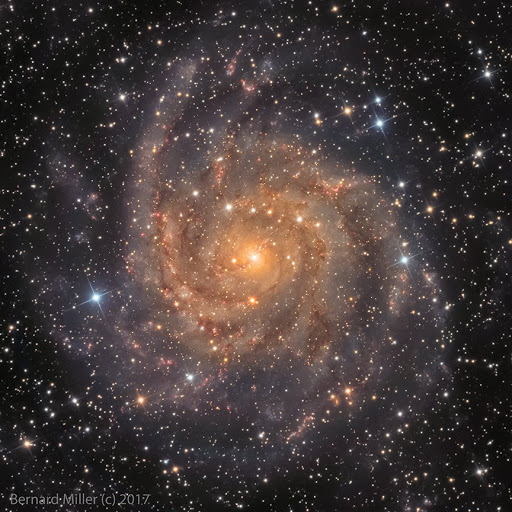