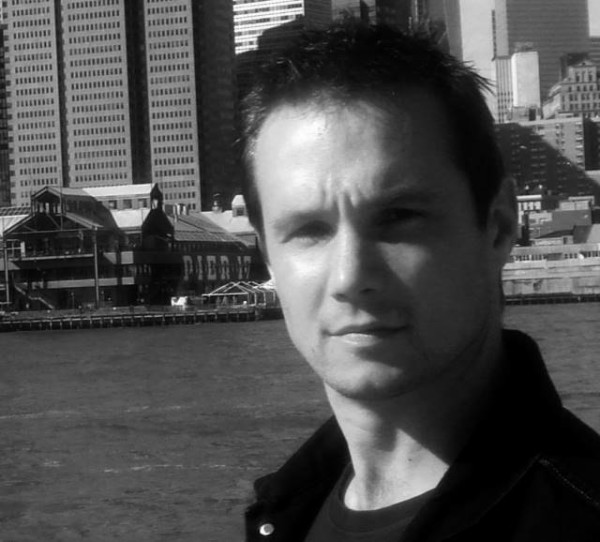 Anthony Rocco Sclavi has a riveting, high-intense energy that is as contagious as it is captivating. He has managed to harness this ubiquitous reservoir of insight and implement it into his art work.

Anthony is a Freelance Artist, whose focus has been in Painting & Drawing in the fields of Abstract and Representational. He is also the Creative Director for BRIO Books; a book-publishing service for self-publishing authors and small presses. And when Anthony has spare time he plays guitar and records in the studio. Anthony’s web site address is www.sclavi.net

Anthony has lived on the northside for about five years in the Camden neighborhood. He is a full-time Dad raising his five-and-a half-year-old son Rocco. Anthony’s brother Dan also shares the home; Dan also works for BRIO at their warehouse in Northeast Minneapolis in shipping and receiving.

Anthony recalls, “I remember while attending kindergarten trying to replicate the rooster on the Corn Flakes box, and since then I’ve had an affinity toward roosters. In the Chinese horoscope I am the Rooster! I started working with oil paint at about 12 years old and further cultivated my art interest taking summer classes at the University of Wisconsin-Superior at about 13.” Anthony grew up in Superior, Wisconsin. Throughout high school Anthony took three art classes per year, later continuing art studies at the University of Minnesota in Duluth.

Next, Anthony had a four-year hiatus, redirecting his focus from painting and drawing to music. He played guitar with a heavy metal band called “Outside the Fences” during this period. But finally he returned to his academic pursuits, and received his Bachelor of Arts degree in Studio Arts, in 2007, from the University of Minnesota. Anthony currently plays guitar with a group called “Manchild” but primarily records; rarely performing live. He began his musical pursuits at 12.

Anthony became very enterprising while transitioning from academia to the job market. Very excitedly articulating, “While bartending at Cafe Havana I was able to market my freelance Paintings to customers.” This was indeed remarkable. “And in 2008 while pounding the streets for work I had a lucky break. I had been working at Hotel Sofitel with my friend Dan and one day I randomly met with Dan at the BRIO and surprisingly there was a job opening for an Illustrator. I was able to show my portfolio to Will Reynolds, President of BRIO, got hired and remained there ever since.”

I wanted to know more more about Anthonys’ art work. Then Anthony deluged me with perspective, “I work from either the abstract or the representational/realistic point of view. I can take the traditional approach to represent a image as it really is or experiment with mixing work with multiple medias like sound, video, photography etc. I an interested in a unifying approach, problem-solving. I have to make a decision and be involved. I am interested in the Process not concerned with the end result. Is the Process separate or combined? Process is vital.” This idea is exemplified in the genre of the Psycho Thriller, as demonstrated in film and the art world. Mentors of this genre are vast such as; David Lynch/film, Edward Hopper/paintings, Wendy White/photography, Liza Lou/bead art and Adrian Ghein/painter.

Anthony has been substantially influenced by the abstract expressionist Robert Rauschenberg who would implement used materials to his work called “Combines,” and psychologist William Glasser of the “Choice Theory” creating a new psychology of personal freedom. Anthony expresses, “I have had two goals of expressing, one of a no pre-conceived notion, and two that of the classical approach; but I feel I am about to leave this process and explore new art work. I have been studying figure drawing at The Atelier Lack Studio in Minneapolis, and I want to explore the human body.”

“I spent my 20’s like a work-horse, now I am ready to do my work. I am in no hurry to develop my original work. I want to give myself 10 years to open it up and study and grow.” I think of irony and truth; all media is a lie, like representational work trying to convince someone your work is real. I think of artists like Tonja Torgerson working with silkscreen who has multiple sclerosis, exploring illness and art or artists that have isolated themselves on islands near Nova Scotia, the Apostle Islands or even Madeleine Island. They have isolated themselves to focus, to really focus and produce art.”