The Poor Fellow-Soldiers of Christ and of the Temple of Solomon (Latin: Pauperes commilitones Christi Templique Salomonici), also known as the Order of Solomon’s Temple, the Knights Templar or simply the Templars, were a Catholic military order recognised in 1139 by the papal bull Omne datum optimum. The order was founded in 1119 and was active until 1312 when it was perpetually suppressed by Pope Clement V by the bull Vox in excelso.

The Templars became a favoured charity throughout Christendom and grew rapidly in membership and power. They were prominent in Christian finance. Templar knights, in their distinctive white mantles with a red cross, were among the most skilled fighting units of the Crusades. Non-combatant members of the order, who formed as much as 90% of the order’s members, managed a large economic infrastructure throughout Christendom, developing innovative financial techniques that were an early form of banking, building its own network of nearly 1,000 commanderies and fortifications across Europe and the Holy Land, and arguably forming the world’s first multinational corporation.

The Templars were closely tied to the Crusades; when the Holy Land was lost, support for the order faded. Rumours about the Templars’ secret initiation ceremony created distrust, and King Philip IV of France – deeply in debt to the order – took advantage of this distrust to destroy them and erase his debt. In 1307, he had many of the order’s members in France arrested, tortured into giving false confessions, and burned at the stake. Pope Clement V disbanded the order in 1312 under pressure from King Philip. The abrupt reduction in power of a significant group in European society gave rise to speculation, legend, and legacy through the ages.

At dawn on Friday, 13 October 1307 (a date sometimes linked with the origin of the Friday the 13th superstition) King Philip IV ordered de Molay and scores of other French Templars to be simultaneously arrested. The arrest warrant started with the phrase: “Dieu n’est pas content, nous avons des ennemis de la foi dans le Royaume” [“God is not pleased. We have enemies of the faith in the kingdom”]. Claims were made that during Templar admissions ceremonies, recruits were forced to spit on the Cross, deny Christ, and engage in indecent kissing; brethren were also accused of worshipping idols, and the order was said to have encouraged homosexual practices. The Templars were charged with numerous other offences such as financial corruption, fraud, and secrecy. Many of the accused confessed to these charges under torture (even though the Templars denied being tortured in their written confessions), and their confessions, even though obtained under duress, caused a scandal in Paris. The prisoners were coerced to confess that they had spat on the Cross: “Moi, Raymond de La Fère, 21 ans, reconnais que [j’ai] craché trois fois sur la Croix, mais de bouche et pas de cœur” (“I, Raymond de La Fère, 21 years old, admit that I have spat three times on the Cross, but only from my mouth and not from my heart”). The Templars were accused of idolatry and were suspected of worshiping either a figure known as Baphomet or a mummified severed head they recovered, amongst other artifacts, at their original headquarters on the Temple Mount that many scholars theorize might have been that of John the Baptist, among other things. 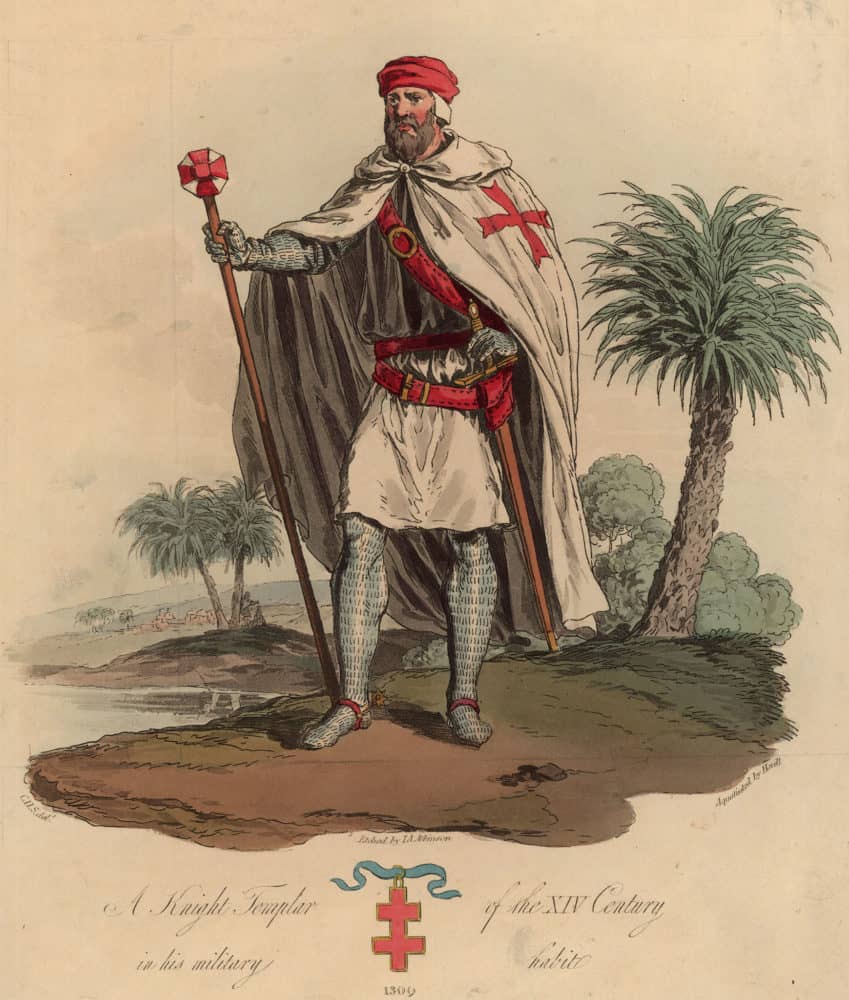 1309, A soldier wearing the uniform of a Brother Knight in the order of the Knights Templar. The double barred Cross of Lorrain underneath the figure links Godfrey of Bouillon, a founder member of the order, with the movement. (Photo by Hulton Archive/Getty Images)