When does something really begin? Where is its point of emergence into the world? Is there a difference between one's manifestation and one's source? Is there a separation? If we were talking about collaboration amongst a group of people that also stretches over time, what does that mean? Did we begin in our mothers' wombs or the fire in our fathers' eyes? Is meaning fixed in time or does it flow like a night river gathering dreams and nightmares from all our shores flowing toward sunrise? What spirits known and unknown have guided and protected us?

How did the poetry/jazz ensemble known as AncestorEnergy come into being in 1981? What sunlit morning or burning sunset spoke to our individual or collective soul? What casual cruelty, bumbling-fumbling or knowing embrace brought us to this Light that has been the experience of this band? AncestorEnergy is ruff and elegant magic, the anarchy of Love. This is transgressive, affirming and hopeful "stuff" under the cloud of what is probably another Dark Age. AncestorEnergy comes through us, not from us.

In present time, AncestorEnergy began at the AfricanAmerican Cultural Center in the late 70s during what I consider the 2nd Black Renaissance known as the Black Arts Movement. It began with composer/pianist Carei Thomas, master-musician saxophonist David Wright and myself, Louis Alemayehu, in Minneapolis, Minnesota. We began with a request to do a fundraiser for Minnesota's Farm Labor Association. There was one "rehearsal" of sorts. Carei and David listened to the poems. I talked to them about the music I listened to when I was writing, or songs and rhythms that came up for me when I recited these poems. I tapped out the rhythms on which I hung my words and phrases. AncestorEnergy musicians are most often thoughtful, precise and spontaneous. We live in the Fire, are transformed in that element and hunger to touch each of you - man, woman, child, "stranger" or neighbor - in the spirit of Tikun Olam, a Jewish concept which means to heal the World.

I think, in part, because the three of us came from Chicago, there was a common musical/cultural frame of reference. We communicated in short hand. We could feel one another and the music and poetry "just happened". We have followed that pattern of little to no rehearsal and have been joined over the years by some incredible musicians. They have included: Gary Schulte, Donald Washington, mick laBriola, Jeroen van Tyn, David Edminster, George Parker, Jose F. James, Maisah Blanton, Jeff Bailey, Kevin Washington, Carl Adams and many, many more. Despite my words and Carei's musical direction, this performance group would not have been possible without everyone's contribution.

mick laBriola and his son Diego (a young ancestor now) played a special role in making this CD happen. Diego's early departure from the physical plane, as it pierced his father's heart also inspired him to be an insistent driving force behind the birth of this first AncestorEnergy CD. Diego's spirit, among other Ancestors, is in this CD.

The musical compositions are brilliant; Carei Thomas has scaled the heights and brings back proof. The gathered musical talent (Donald Washington, David Wright, Gary Schulte, Mick LaBriola, Jeroen van Tyn, Jeff Bailey) speak back to the composition with stunning performances. Louis Alemayehu's poetry and voice and voice work is possessed, spirited; functioning precisely the way it should. Leading us through those labyrinths of discovery. Guiding us. Haunting us. By the time we are asked to remember "That Evening in the Kitchen," with additional voices by Maisah Blanton and Jeroen van Tyn, I am willing to follow him/them anywhere. There are favorites lined up waiting for you here. But be soul prepared. This is true flight. Destination: Allwhere. -Alexs D. Pate is a Visiting Assistant Professor of African American and African studies at the University of Minnesota and author of the novels Amistad, West of Rehoboth, Losing Absalom, The Multicultiboho Sideshow and Finding Makeba.

From early on, Carei Thomas and I have been in accord with the conviction that the AncestorEnergy presence in the community, in the world, was about healing. Over the years we have performed for African Liberation, Native American sovereignty, women's rights, peace and justice, the Latin American New Song Movement, multicultural education and community building. A significant part of what AncestorEnergy evolved into was the result of ceremonies that took place on the Prairie Island Mdewakanton Dakota (Sioux) Reservation in the early 1980's at the homestead of Dakota elder, the late Amos Owen. The foundation of our identity was then set with Song of the Blackstone Pipe: We are the River. The creation of that poem is a story all by itself, long and mystical with prophetic overtones! Collectively, we have never been about doing gigs or moving product. We, through words and music, have reflected the Buddhist insights that there is no separation between mind and body or human beings and their environment. No separation! This current CD, our first, comes from two things: 1) Feeling the need to document what we have been doing. After all, we ain't getting no younger! And 2) the feeling of many in our community that what we do needs to be heard NOW! and more than ever. If that is true, here it is -Louis Alemayehu October 4, 2004

ALL POEMS BY LOUIS ALEMAYEHU 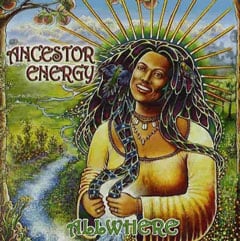