Jupiter will align with Earth and the sun tonight, standing alongside our planet and the fiery star in a perfect straight line.

This phenomenon, known as opposition, occurs just once every 13 months and finds the gas giant reaching its closest distance to Earth. Most significantly for space enthusiasts, opposition marks the year’s most optimal Jupiter viewing conditions, enabling binocular-equipped watchers to easily spot the planet and perhaps even a few of its 79 moons.

According to Vox’s Brian Resnick, Jupiter will grace the southeastern sky at dusk and remain visible until setting in the west at dawn. Those with binoculars should be able to see both the enormous planet, officially the largest in our solar system, and its four brightest moons—Io, Europa, Callisto and Ganymede. If you own a telescope, you may also be able to make out individual cloud bands and Jupiter’s characteristic Great Red Spot.

To locate Jupiter, simply look to the southeast and find the brightest object in the sky, excluding Venus and the moon, as Inverse’s Scott Snowden points out. Although the precise moment of opposition will take place at 6 p.m. Eastern time, Sky & Telescope’s Bob King writes that the planet will reach ideal viewing height around 11:30 p.m. and will remain visible through sunrise, or roughly 7 a.m.

Jupiter will be well placed for observation, in the constellation Ophiuchus. It will be visible for much of the night, reaching its highest point in the sky at around midnight local time.

Jupiter has aurorae. Like Earth, the magnetic field of the gas giant funnels charged particles released from the Sun onto the poles. As these particles strike the atmosphere, electrons are temporarily knocked away from existing gas molecules. Electric force attracts these electrons back. As the electrons recombine to remake neutral molecules, auroral light is emitted. In the featured recently released composite image by the Hubble Space Telescope taken in ultraviolet light, the aurorae appear as annular sheets around the pole. Unlike Earth’s aurorae, Jupiter’s aurorae include several bright streaks and dots. Jupiter’s Great Red Spot is visible on the lower right. Recent aurorae on Jupiter have been particularly strong — a fortunate coincidence with the arrival of NASA’s Juno spacecraft at Jupiter last week. Juno was able to monitor the Solar Wind as it approached Jupiter, enabling a better understanding of aurorae in general, including on Earth. 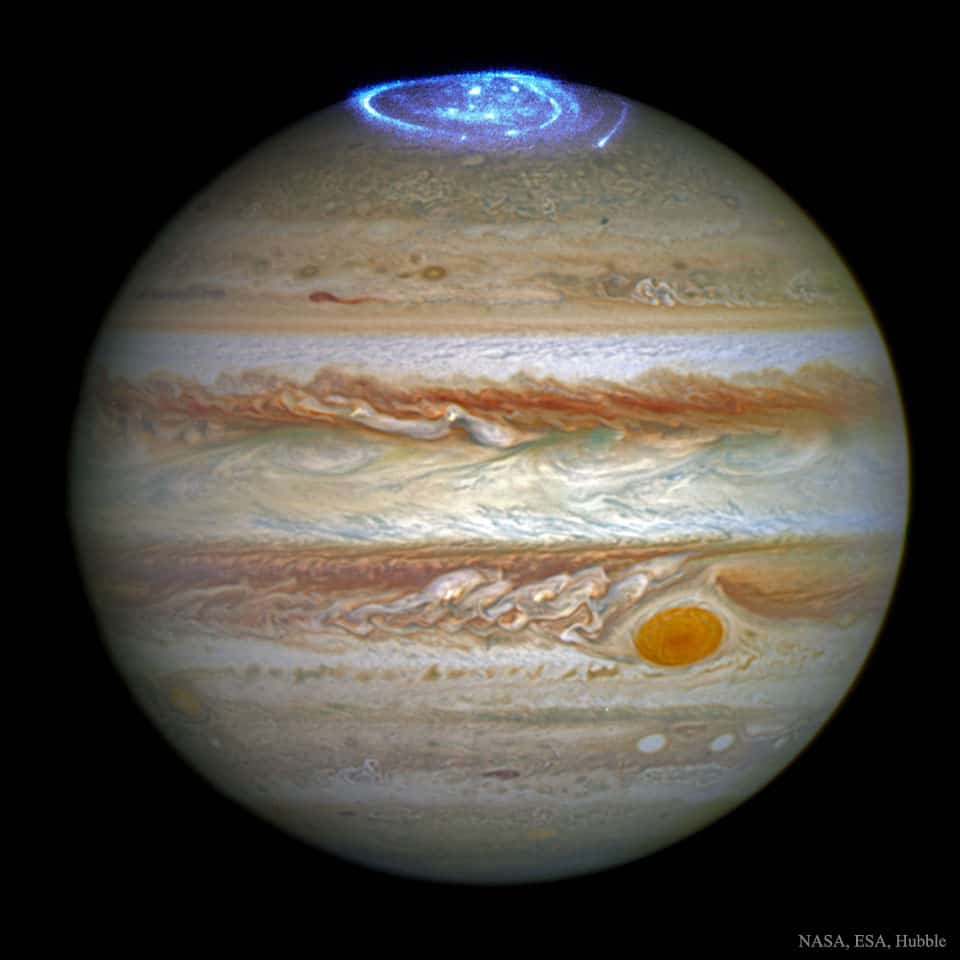