Skip to content
Two galaxies, about 50 million light-years away, are locked in a galactic embrace — literally. The Seyfert galaxy NGC 1097, in the constellation of Fornax (The Furnace), is seen in this image taken with the VIMOS instrument on ESO’s Very Large Telescope (VLT). A comparatively tiny elliptical companion galaxy, NGC 1097A, is also visible in the top left. There is evidence that NGC 1097 and NGC 1097A have been interacting in the recent past.
Although NGC 1097 seems to be wrapping its companion in its spiral arms, this is no gentle motherly giant. The larger galaxy also has four faint jets — too extended and faint to be seen in this image — that emerge from its centre, forming an X-shaped pattern, and which are the longest visible-wavelength jets of any known galaxy. The jets are thought to be the remnants of a dwarf galaxy that was disrupted and cannibalised by the much larger NGC 1097 up to a few billion years ago.
These unusual jets are not the galaxy’s only intriguing feature. As previously mentioned, NGC 1097 is a Seyfert galaxy, meaning that it contains a supermassive black hole in its centre. However, the core of NGC 1097 is relatively faint, suggesting that the central black hole is not currently swallowing large quantities of gas and stars. Instead, the most striking feature of the galaxy’s centre is the ring of bright knots surrounding the nucleus. These knots are thought to be large bubbles of glowing hydrogen gas about 750–2500 light-years across, ionised by the intense ultraviolet light of young stars, and they indicate that the ring is a site of vigorous star formation
With this distinctive central star-forming ring, and the addition of numerous bluish clusters of hot, young stars dotted through its spiral arms, NGC 1097 makes a stunning visual object. 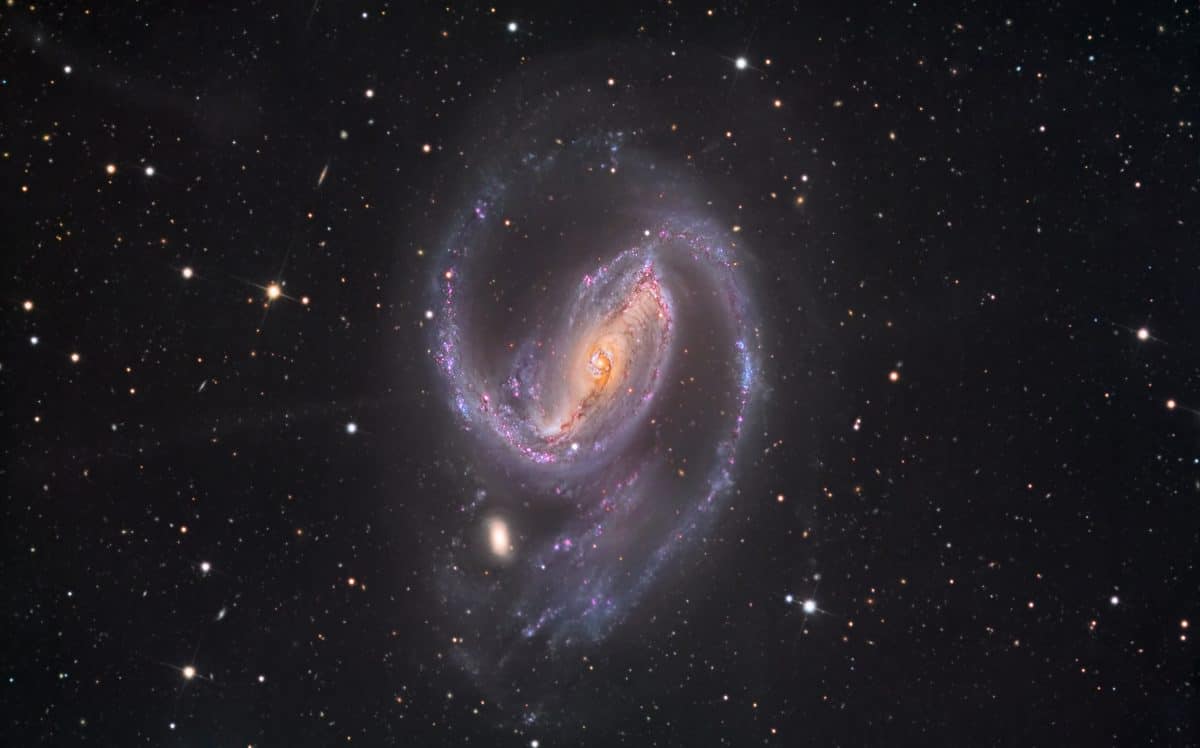