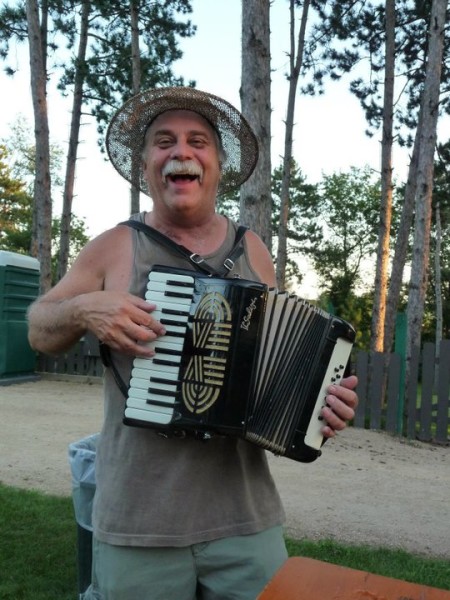 In the late 60’s and early 70’s an abundance of musical talent was emerging from the the Twin Cities. This very powerful and dynamic Rhythm and Blues movement would help put the Twin Cities on the national musical map; producing hard hitting grooves. At the very core of it’s inception, keyboardist & multi-instrumentalist (mandolin, fiddle, dobro, banjo, harmonica and accordion) Bruce Jackson became an integral part of this legacy.

The magnanimous and rapturous Bruce Jackson is a musician, songwriter, bandleader, certified piano tuner and music educator living in the Camden area. He and his partner, Beth Ann Hedman Dodds are recent arrivals to the northside. Bruce’s daughter Cindy lives in Bloomington, Minnesota. She has two boys, Jackson 11 and Thomas seven.

Beth is a vocalist, formally singing with the choir at St. Georges Episcopal Church in St. Louis Park. She is the site coordinator for the Loaves and Fishes dining facility in Coon Rapids and sub-coordinator for the Richfield location. Loaves and Fishes have ten locations including suburban facilities. Beth invites musicians to perform at the “soup kitchens”. Beth states “We are always looking for musicians to serve the community. Bruce and I ‘Cook & Play’, and along with other musicians have actually prepared meals for up to 150 people and then play music afterwords.”

Bruce and Beth are both members of a jazzy, funky, folky, bluesy music project called MOONDOGS88; conceived in 2001. The band is hoping to release their first CD by the summer of 2012. You can sample their music or contact Bruce for bookings at: http://moondogs88.com/moondogs88.com/Welcome.html

Bruce was among the plethora of outstanding musicians that emanated from the White Bear Lake area. Bruce grew up only about a half a mile from the preeminent vocalist Doug Maynard. And together they performed, recorded and created songs for about a decade. “I remember playing hockey with Doug at Beach School in White Bear Township, and knew him in high school.”

Music was abundant in Bruce’s childhood. He recalls at about age five hearing the delightful turn-of-the-century, parlor-music piano-playing of his grandmother, Loretta Pearl Jackson. “I remember hearing ‘Cotton Fields’ and country music like Hank Williams and Marty Robbins. And I’ve got old reel-to-reel tapes of her singing. Then there was Aunt Betty Jean, the meat-and-potatoes piano player. Whose rich lush chords implemented sixths and seconds. Betty Jean would play music of jazz giant George Shearing.”

“Later I remembered dancing with my sister Judy (named after Minnesota girl Judy Garland) to Elvis’s ‘Heartbreak Hotel’. And there was an old RCA Victrola LP record player. It was placed in a corner of the house where kids couldn’t get to it.”

By the age of 12 Bruce was playing guitar, emulating the music of the Beach Boys and the Beatles. He played at talent shows and car shows. The muscle car phenomena was influenced by his two older brothers Bill and Bob. At age 15 or 16, Bruce was playing a red-italian Farfisa electric keyboard. His first band was “The Uncalled Four”. And by high school he had a more serious project. A R&B soul band called “Soul Syndicate”. “I went from Rock to R&B to Miles Davis.”

In 1970 or 71 Bruce joined “The Marauders” with Doug Maynard, performing jazz and R&B tunes. Later the band turned into a space funk group called “Yak Yak Boom” without Maynard, leaving other members to cover the vocals. “Whatever we did, we took it out. Never did a song for three minuets, we jammed it out! I got connected with the whole Minneapolis music industry—we were hooked up!”

Bruce continued to work with Doug Maynard in the “Space Heaters” at the 400 bar and later working with “The Doug Maynard Band”. Bruce released an album called “Lullaby”. The “Angel in the Garden” was co-written with Doug Maynard; produced on Cold Wind Records, by Tim “Dr. Dog” Bradach (http://www.coldwind.com/). The recording also included Bruce “Creeper” Kurnow and Bobby “Stinger” Schnitzer who were known as the Highland Park Boys. Bruce and Doug were the Bear Town Boys.

While studying music theory at Lakewood Junior College in 1977, Bruce’s career became permanently transformed. Bruce started taking piano lessons with a legally blind bossa nova jazz painist and keyboardist from São Paulo, Brazil; Manfredo Fest. “He would sit you down on the same piano bench that he was seated at, turn the cassette deck on and start playing up and down the 88’s. He taught me how to really play! Manfredo showed me how to create your own mix.” In 1999 my Dad passed away and two weeks later Manfredo also died; I was devastated!”

From 1980 thru 1988 Bruce worked at Torp’s Music in St Paul, a musicians instrument staple at the time. In 1987-88 he worked with “Mambos Combo”. And in 1990 joined the reggae band “Ipso Facto”. Ipso won the “Best Unsigned Band in the World” award and obtained a recording contract from Epic Records. Later in the 90’s Bruce worked with the “617 House Band”.

The MOONDOGS88 currently perform at Manitou Station Resturant, 617 Lounge, Tally’s Dockside and Admiral D’s all located in White Bear Lake, MN. Beth and Bruce have been writing music together and want to “Get the one on the wall that sticks.” They have a great bunch of guys in the group and are constantly looking for new places to perform.

Bruce contemplates, “In music, the more you know, the less you know—the deeper it gets.”

Share this post
← David Cunningham “When I am done learning I will be dead”!Pwajdeur Swanstrom “Dedication, many efforts, taking the music seriously and having a good time! →