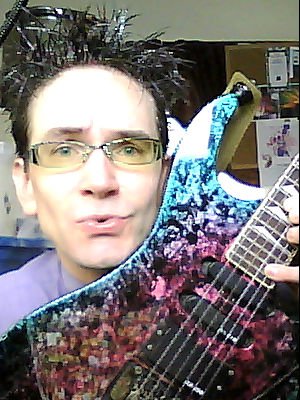 An electric-luminescent glow of enthusiasm emanates from the highly energetic and passionately motivated musician Pwajdeur (pronounced water) Swanstrom. He is a guitarist, singer-songwriter and bandleader for his current musical endeavor, HypNoXIOUs. Pwajdeur identifies HypNoXIOUs as an original alternative-progressive-indie rock band. You can hear this group at http://vimeo.com18960396 or at www.myspace.com/hypnoxious. Pwajdeur has two children: his daughter Serendipity, 12, and son Cavishaw, 9.

Music has been a life-long passion for Pwajdeur. And in addition to his musical exploits, he is CEO for a food-seasoning company for popcorn called “Pwajdeurcorn” (distributed at Whole Foods) that he started about three or four years ago; he sells electronics at Sam’s Club part-time; and is a full-time student at Minneapolis Community and Technical College majoring in Sound Arts.

He and his wife, Gera Exire La Tour, have lived in north Minneapolis for about two years and are very proud 2011 Tornado survivors. Gera ([email protected]) is the President Emeritus • Member at Large for the Minnesota Brewers Association (mnbrewers.com), a collection of home brewers of all levels of experience located in the greater Minneapolis/St. Paul metropolitan area. It’s member’s interests run the gamut from those who brew using extract kits, to all-grain mashers, to those who simply appreciate and enjoy good beer. Gera also teaches the BJCP Exam Prep Class Organizer at Beer Judging Certification Program (www.bjcp.org). Pwajdeur emphasizes, “It’s about the smell, mouth feel, color and taste.”

Pwajdeur and Gera’s home was hit by last May’s tornado, that pounded north Minneapolis. Pwajdeur recounted the shocking event: “Gera was sitting at the computer and heard something. The power in the house went off and on! You could feel a pressure mounting in and around the house, Gera heard a rumble and something like thunder and ran in the basement!” Fortunately, Gera was not hurt. But the house sustained heavy damage, including replacement of the roof, ceilings and walls. Pwajdeur and Gera had to relocate to a hotel and an apartment for four months.

Pwajdeur grew up in south Minneapolis near 50th and Portland and attended Washburn High School. He lived with his step-brothers Steve and Matt. He also had two more siblings living in Texas, Amy and Mark. Pwajdeur remembers his first music experiences listening to his brother Mark’s record collection of rock, heavy metal and 80’s music at about age three or four. He recalls the Beatles, the Bee Gees and Styx. He recounts later hearing his Mom’s collection of music, ranging from Linda Ronstadt to Jim Croce to Paul Simon.

Pwajdeur enthusiastically recalls, “Then I met my instruments. While visiting Texas, usually about twice a year, I picked up my first guitar at age 12. My brother Mark played bass and his friend Tom played guitar and provided an opportunity that remained with me throughout my life.” Pwajdeur immediately took the guitar seriously, “ I started taking lessons and loved making sounds on the guitar. I remember listening to Adrian Belew from King Crimson.”

“I played guitar forever. My first guitar was a rental of a Les Paul copy, not even an Epiphone. Then I obtained an Ibanez RG 430 with EMG 61 active pickups. I had my rock and my Carvin double-stack amplifier. I played from Junior High all throughout High School and was always in a band. But the most memorable band was ‘Raging Saints.’ Then I had a very long hiatus.”

“In 1991 I had a motorcycle accident, and the bike landed on my head. I was in a coma for two weeks; enough time to be gone forever. I had incurred a TBI, a traumatic brain injury, inflicting damage to my frontal lobe area. This required OT and PT, Occupational and Physical therapy and was very extensive. All of this took about 10 years of my life. I had to learn how to walk and talk again but I got it back.”

Before the inception of HypNoXIOUs Pwajdeur performed with many music projects: Arcasm, Illusion, Azone, Oyster Salad and the Way Cools among others.

I was very curious about Mr. Swanstrom’s first name, Pwajdeur. His birth name is Timothy Swanstrom, however he had a dream that revealed an alternative name that he legally adopted. Pwajdeur expressed, “I had a dream about this name, it came out of the ocean; a name that was inscribed in the sand. It was so clear and vivid. And there was a shimmering rain falling, very metallic looking. And there was my name, Pwajdeur, written in the sand coming out of the water.”

This month on Tuesday, March 13th, Pwajdeur will be performing with HypNoXIOUs at the Fine line Music Cafe, in downtown Minneapolis, located at 318 North 1st Avenue; 612-338-8100.

HypNoXIOUs music explores “Jane’s Addiction mixed with U2, mixed with Yello, mixed with PortisHead, mixed with Soul Coughing, mixed with Led Zeplike Alice in Chains on a mystical retreat with Prince in a cold sweat on Mars with Bowie singing Sinatra with Cobains rasp and Jeff Buckley’s butterflies and the soul of Freddie Mercury.

Pwajdeur recapitulates, ““HypNoXIOUs was a culmination of my music writing for a long time and the rebirth of many ideas over the years. Dedication, many efforts, taking the music seriously and having a good time!” He describes it as, “Making music, writing songs, performing outlandish songs that tap the very essence of oomph.”

Share this post
← Bruce Jackson “In music, the more you know, the less you know—the deeper it gets.”Lorenzo Michelutti “Simplicity is the ultimate sophistication” →