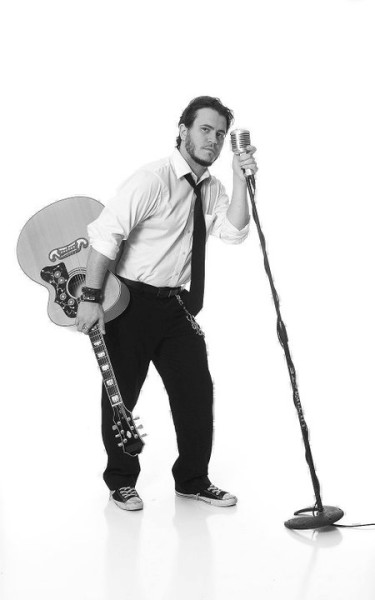 With an undaunted air of confidence and a tranquil disposition, singer-songwriter and guitarist Lorenzo Michelutti insists; “I always knew what I wanted to do from a very early age.” Lorezo is the lead vocalist and rhythm guitarist for his premier music project, “Concentual.” This spelling means to possess harmony. Concentual is a four piece rock band that has captured the hearts and praise of many of the midwest’s top venues and artists, being touted as the “next big thing” in the Twin Cities. You can check the group out at http://www.facebook.com/Concentual

Born in Ohio, Lorenzo moved to Brooklyn Park, Minnesota in 1990 with his parents Guido and Genny and brother Alex. His parents and brother are originally from Italy, and he is the first in his family to be born in the U.S. At age six Lorenzo’s grandpa Ermes, gave Lorenzo a tape recorder. This gesture launched Lorenzo into what would become a lifelong passion; music! “I started writing songs at that time. I would turn the tape recorder on and sing my own little melodies and make words up; my lyrics.”

“By fifth or sixth grade I started writing poetry. And around that same time I asked Mom if I could get a guitar; thankfully she said yes! As early as I can remember I wanted to be Elvis. Soon I had my first guitar-a Samick ‘strat copy’ with a 15XR Crate amp. I took lessons for about three months at Schmidt Music in Brooklyn Center with Paul Krueger. I wanted to learn how to play accompaniment chords so I could write my own songs. Ever since then I have been self-taught. However, when I was 22, though (and in the band Civilian), I took vocal lessons from Cara Mastrey, sister of Tawn Mastrey; a former DJ at 93X.”

“Over the next few years, I kept writing until I put together my first band, ‘Mezzanine Stair’, while I was attending Osseo High School. This was a 4 piece group from about 1997-99. After that I focused on college.”

Lorenzo graduated in 2002 from the University of Minnesota with a Bachelor of Arts degree in Philosophy. After college he started playing solo acoustic gigs. He performed a series of acoustic gigs at the New Dehli Bar, and took one-off shows, opening for national acts like Sondre Lerche, the Golden Republic, and others at local hot spots such as the Fine Line Music Cafe, and even headlined an acoustic evening at First Avenue’s Mainroom. In 2007 “Concentual” was looking for a lead vocalist and Lorenzo started performing with the band, which currently does 80 to 85 shows per year.

Concentual has been working on original material for the past couple of years and started looking for local producers last fall. They found James Harley of World Record Productions who has a substantial client list ranging from Lucinda Williams to Quietdrive to Prince. Concentual plans on releasing three EP’s (extended play recordings) over an 18 month period. “It’s important to stay in front of peoples faces. If you release a full album people will attach themselves to a few cuts and forget about the rest of the music. Give people two or three songs, let it marinate in their ears and they’ll be ready for more later.”

The EP release approach was introduced to Lorenzo and his bandmates by a pivotal figure in the American music industry, Bob Lefsetz. Bob writes a email newsletter and blog called “the Lefsetz Letter” which expounds on the diminishing role of the major labels; the decline of physical musical formats; the prevalence of Peer-to-Peer file-sharing; and the need for legitimate distribution.

“The work really begins after the recording. Now we work our asses off to promote our work. Record labels have no power anymore. Now, you see many old cats from famous bands on the road. They have to play live to stay in business. You can’t just hide behind record sales anymore.”

Starting May 4th Concentual will start a soft sell of the first EP; doing a fund raiser at O’Gara’s Garage in St Paul for “Rock the Cure”. This is a benefit for Breast Cancer including artists such as Tim Mahoney, GB Leighton, Molly Maher and her Disbelievers, and Hookers and Blow. The Concentuals official EP release date will be on Saturday July 28th at Bunkers with July Fighter and La Madness.

“I often get my inspiration from non-music related things like reading books and watching movies. I get a vision about a song and it’s like I’m writing a sound track for that vision. Sometimes I start with a word or phrase or melody, with no rhyme or reason. Just whatever inspires me at that moment. I love playing dirty rock & roll and sometimes love writing a ballad.”

“There is a quote that comes to me every-time I’m writing music, by Leonardo da Vinci; ‘Simplicity is the ultimate sophistication’.”

Share this post
← Pwajdeur Swanstrom “Dedication, many efforts, taking the music seriously and having a good time!MOJO ROOTS now available for bookings in the Twin Cities →