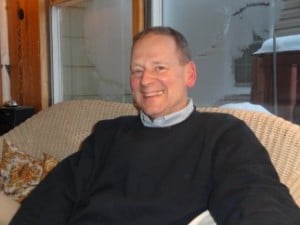 The very calm, gentle and kind Jim Zieba is a pianist/organist mostly known for his church accompaniment based in Robbinsdale, just across Memorial Drive from north Minneapolis. He worked for Salem Lutheran Church at 4150 Dupont Avenue North for 26 years. Although Jim considers himself primarily a soloist, he has done a great deal of work with church accompaniment, as well as accompanying vocalists, small ensembles and big bands. Jim’s repertoire is vast: from Bach, Mozart, Ravel, Debussy, Chopin, Mendelssohn, Barber to Gershwin (he expressed his passion for “Rhapsody in Blue” by Gershwin in particular).

Jim actually lives in the house that he grew up in as a child, rare among performance artists (or anyone) these days. Jim started his musical journey at age eight studying with a piano teacher, Mrs. Wilson, who would come to his house to give lessons. Jim recalls his Dad playing his old 78s often, influencing Jim’s interest in music from an early age.

By age 12 Jim was studying at MacPhail Center for Music with Ted Bergman, who worked for the First Baptist Church at 1021 Hennepin Avenue for many years. While attending Robbinsdale High School Jim played in a big band format. After high school Jim entered the Navy and took a brief sabbatical from music. When he returned home he entered the Electrical Industry field after studying at St. Paul Vocational College; Jim now works with Traffic Signal Maintenance for the City of St. Paul.

A huge influence in Jim’s musical career was his eight-year tutelage from music instructor Jim Johnson of Augsburg College. Mr. Johnson changed the way Jim Zieba perceived music, especially emphasizing chord voicing. Jim says Mr. Johnson “Opened my eyes,” and insisted on him “Playing it the way it was intended to be played!” This was a profound experience. Another incredible influence was Katherine Sundquist, orginally from Red Wing and now in Eau Claire, WI, who taught Jim how we hear a piece of music influences how we execute a piece of music.

Currently, Jim works occasionally with the Como Pops Orchestra and the Capitol City Wind Ensemble. He has accompanied artists such as the Dale Warland Singers and the Minnesota Opera. Additional church accompaniment performances have included Lutheran Memorial at 38th and Sheridan and St. Austin and St. Bridget Catholic churches on the north side.

(St Austin and St Bridgets churches are now part of a reorganization plan to merge the two churches as one entity. Read more…)

Jim shared some very delightful stories about his career. He remembered with a lot of amusement a private Soiree performance in the Golden Valley home of Maxcine Heinetz that also included a wonderful dinner for the small ensemble of musicians. He also recounted enthusiastically how he found a 1930’s Wurlitzer organ with a full pedal board. It was on this instrument that he developed his skills as an organist.

Jim often tunes the piano on which he plays. He tunes by ear working with the first octave of a note, the harmonics, tuning out the beat, tuning by the circle of 4th’s and or 5th’s etc. — no easy task to be sure (www.piano.detwiler.us).

Jim loves music but believes certain modern orchestral pieces are so complex and moving at such an incredible speed this often leaves the listener excluded from the art form or excluded from simply appreciating the music. Jim insists he loves best the pieces that can enable him to “Sit back and enjoy the music.”

Share this post
← Nothando Zulu doesn’t separate the artist from the community“Little Diamonds” Luke Leblanc does the chic a boom, chic a boom →