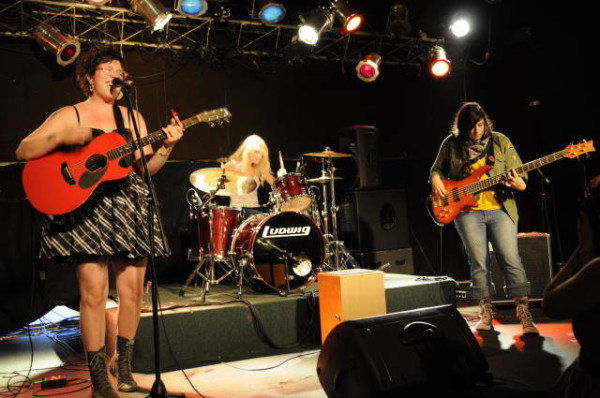 The outgoing subtly flamboyant, confident, gentle and nurturing Kelly Larson is a refreshing spark of exuberance as a young vocalist, guitarist, poken word artist, poet and bandleader in the current very challenging and competitive music market industry. Kelly is a mother of three young toddlers and a musical powerhouse; determined to create her music and perform locally, doing solo performances and playing with her current all girl band, Said Kelly. Check out Said Kelly’s impressive facebook site.

Kelly Larson is a very active full-time mom and wife caring for her beautiful children: Sidney, 3; Prudence, 2; and Lennon, 1. Kelly and her husband Joshua decided Kelly would name their girls, and she chose Beatles names. Joshua was privileged with the naming of the boys, and later confessed he named Sidney after Syd Barret of Pink Floyd. The family has resided on the northside since 2007. Kelly confides she and Joshua love Minnesota and north Minneapolis and “We will live here for the rest of our lives.”

Growing up in Plymouth, Minnesota, Kelly’s interest in music began at age ten when her parents insisted she take private vocal lessons from Lisa Barry. This continued for seven years. “Every year I would complain, I wanna quit voice lessons”, her parents would agree she could quit after a few more lessons. Then Kelly would boast, “I can’t quit, this is awesome!” Kelly sang with the New Hope Church in the Youth Choir and later, at 16, with the Adult Choir doing solos and singing with the Worship Team on Sundays.

By age 12 Kelly learned Guitar at a summer camp, then wrote her first song- “Beautiful”. She was only permitted to listen to Christian Music as a kid from sources such as KTIS-fm 98.5 radio. Kelly only started her own music listening at age 16.

Kelly’s first band was as a vocalist, with “Red Line Dairy”. She was with the group for only 9 months with her brother Adam Peterson playing drums. Later Kelly wanted to learn surfing, so she moved to San Diego with her sister Cory and joined a band called “Keith Keifer and the All Stars” doing classic rock covers from the Stones to Aretha Franklin. “Alot of it I never heard and had to learn,” she remembers.

Kelly met Joshua while getting tattooed at “Forever Yours” in Anoka, Minnesota. (By the way, Kelly has two stunning tattoos-one on each arm: on the right upper bicep is a huge Rock-a-Billy microphone; on the lower left forearm is a cassette player in the shape of the State of Minnesota.)

When Kelly had her second child, she started recording her first solo album. Her guitar teacher, Bruce Balgaard, soon became her producer, therapist, inspiration and recording engineer for that home/raw sound he was looking for in Kelly. “I want to implore you to work with other musicians,” Bruce stressed! “I don’t want to and I want to do it all on my own” Kelly responded. “For every three guy musicians there’s maybe one female musician”. Bruce convinced her to work with other musicians. She agreed and insisted on an all girl band.

Bruce found Kelly two musicians: Heather Weideman on Bass, a student of Bruce’s for eight years and Holly Maczuzak on Drums-both college students. “While practicing I loved how they play and they loved my music.” Their first gig was at the Kitty Kat Klub in March of 2011. Finally, “Said Kelly writes a song for every show, never to be played again, something we share only with that audience.” This is truly unique!

Kelly has become a staple at Plums Bar in St Paul on Sundays, open mike nights showcasing singers/songwriters with Nick Salisbury on Bass and Nick Hensley of the band “Love Songs for Angry Men” as the MC. “I do spoken word, and solo music. So many talented people, always a good crowd and I wrote a poem called “Plums,” which is a sensitive insight into the atmosphere of this network of artists.”

“It’s awesome, I would say yes to every show but I have to deal with two other schedules with Said Kelly. I Love playing music and will do it for the rest of my life. I am a Mother by day and a Musician by night!”

Share this post
← Michael Mothershed “Do it for the Love, and not the money, and you’ll have a career!”Kenneth W Garnier “Music comes from the universe and you are frequency” →