Located inside the Large Magellanic Cloud (LMC) – one of our closest galaxies – in what some describe as a frightening sight, the Tarantula nebula is worth looking at in detail. Also known as 30 Doradus or NGC 2070, the nebula owes its name to the arrangement of its bright patches that somewhat resemble the legs of a tarantula. Taking the name of one of the biggest spiders on Earth is very fitting in view of the gigantic proportions of this celestial nebula — it measures nearly 1,000 light years across ! Its proximity, the favourable inclination of the LMC, and the absence of intervening dust make this nebula one of the best laboratories to better understand the formation of massive stars. This spectacular nebula is energised by an exceptionally high concentration of massive stars, often referred to as super star clusters. This image is based on data acquired with the 1.5 m Danish telescope at the ESO La Silla Observatory in Chile, through three filters (B: 80 s, V: 60 s, R: 50 s). 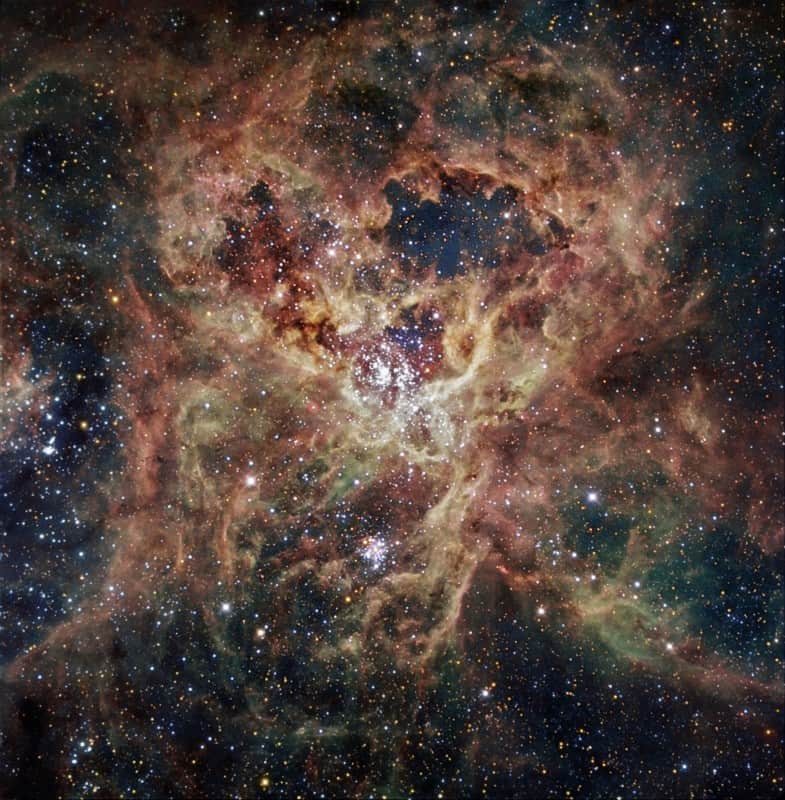 Harold Vick was born on April 3, 1936 in Rocky Mount, North Carolina. At the age of 13 he was given a clarinet by his uncle, Prince Robinson,a clarinet and tenor saxophone player who had been a member of McKinney’s Cotton Pickers. Three years later he took up the tenor saxophone, and soon began playing in R&B bands. He continued to perform, still largely with R&B bands, while studying psychology at Howard University.

Steppin’ Out!, Vick’s first album as leader, was recorded for Blue Note in 1963. After a 1965 performance at Carnegie Hall with Donald Byrd, Vick secured a contract for further albums as leader, and from 1966 to 1974 he had further recording sessions for the RCA, Muse, and Strata-East labels.

Daily Roots with the Skatalites

April 2, 2018
Two extremely bright stars illuminate a greenish mist in this and other images from the new GLIMPSE360 survey. This fog is comprised of hydrogen and carbon compounds called polycyclic aromatic hydrocarbons (PAHs), which are found right here on Earth in sooty vehicle exhaust and on charred grills. In space, PAHs form in the dark clouds that give rise to stars. These molecules provide astronomers a way to visualize the peripheries of gas clouds and study their structures in great detail. PAHs are not actually “green;” a representative color coding in these images lets scientists observe PAHs glow in the infrared light that Spitzer sees, and which is invisible to us.
Strange streaks – likely dust grains that lined up with magnetic fields – distort the star in the top left. The fairly close, well-studied star GL 490 gleams in the middle right. The new GLIMPSE360 observations have revealed several small blobby outflows of gas from nearby forming stars, which indicate their youth. Such outflows are a great way to target really young, massive stars in their very earliest, hard-to-catch stages.
This image is a combination of data from Spitzer and the Two Micron All Sky Survey (2MASS). The Spitzer data was taken after Spitzer’s liquid coolant ran dry in May 2009, marking the beginning of its “warm” mission. Light from Spitzer’s remaining infrared channels at 3.6 and 4.5 microns has been represented in green and red, respectively. 2MASS 2.2 micron light is blue. 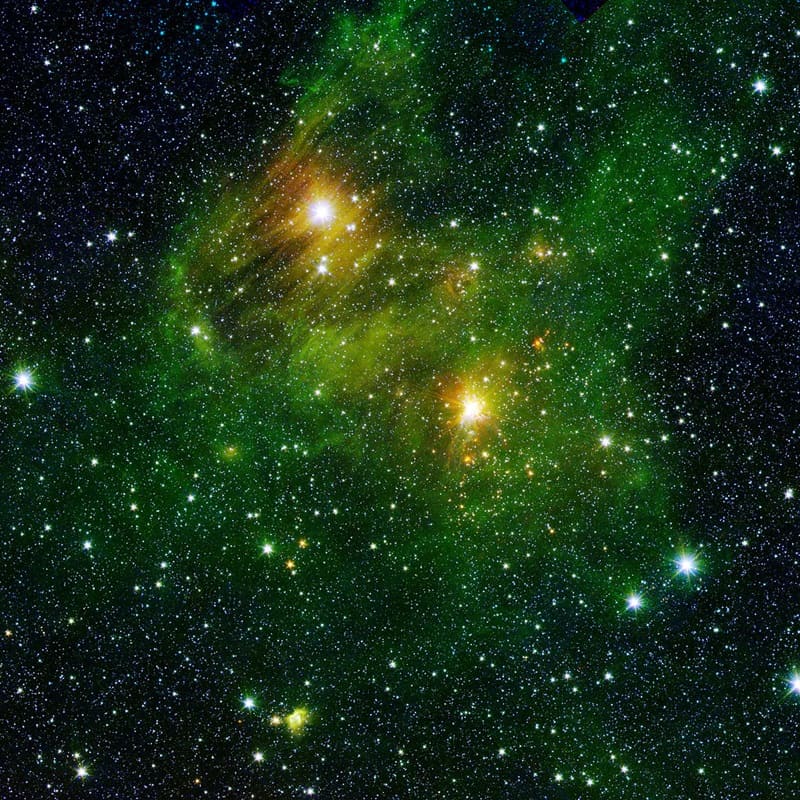 Larry Coryell was born in Galveston, Texas. He never knew his biological father, a musician. He was raised by his stepfather Gene, a chemical engineer, and his mother Cora, who encouraged him to learn piano when he was four years old.

In his teens he switched to guitar. After his family moved to Richland, Washington, he took lessons from a teacher who lent him albums by Les Paul, Johnny Smith, Barney Kessel, and Tal Farlow. When asked what jazz guitar albums influenced him, Coryell cited On View at the Five Spot by Kenny Burrell, Red Norvo with Strings, and The Incredible Jazz Guitar of Wes Montgomery. He liked blues and pop music and tried to play jazz when he was eighteen. He said that hearing Wes Montgomery changed his life.

His collaborations rank as some of the most successful in music history, and as a touring musician he performed with hundreds of notable artists. He recorded 33 albums and at least 430 songs. He wrote “Delta Lady“, recorded by Joe Cocker, and organized and performed with Cocker’s “Mad Dogs and Englishmen” tour in 1970. His “A Song for You“, included in the Grammy Hall of Fame in 2018, has been recorded by more than 200 artists, and his “This Masquerade” by more than 75.

As a pianist, he played in his early years on albums by the Beach Boys and Jan and Dean. On his first album, Leon Russell, in 1970, the musicians included Eric Clapton, Ringo Starr and George Harrison. One of his biggest early fans, Elton John said Russell was a “mentor” and “inspiration”. They recorded their album The Union in 2010, which earned them a Grammy nomination.

Russell produced and played in recording sessions for Bob Dylan, Frank Sinatra, Ike & Tina Turner, the Rolling Stones, and others. He wrote and recorded the hits “Tight Rope” and “Lady Blue“. He performed at the Concert for Bangladesh in 1971 along with Harrison, Dylan and Eric Clapton. In 2011, he was inducted into both the Rock and Roll Hall of Fame and the Songwriters Hall of Fame.

Marvin Gaye (/ɡeɪ/;born Marvin Pentz Gay Jr.; April 2, 1939 – April 1, 1984 Washington DC) was an American singer, songwriter and record producer. Gaye helped to shape the sound of Motown in the 1960s, first as an in-house session player and later as a solo artist with a string of hits, including “Ain’t That Peculiar“, “How Sweet It Is (To Be Loved By You)” and “I Heard It Through the Grapevine“, and duet recordings with Mary Wells, Kim Weston, Diana Ross and Tammi Terrell, later earning the titles “Prince of Motown” and “Prince of Soul”.

During the 1970s, he recorded the albums What’s Going On and Let’s Get It On and became one of the first artists in Motown (joint with Stevie Wonder) to break away from the reins of a production company. His later recordings influenced several contemporary R&B subgenres, such as quiet storm and neo soul. Following a period in Europe as a tax exile in the early 1980s, be released the 1982 Grammy Award-winning hit “Sexual Healing” and its parent album Midnight Love.

On April 1, 1984, Gaye’s father, Marvin Gay Sr., fatally shot him at their house in the West Adams district of Los Angeles. Since his death, many institutions have posthumously bestowed Gaye with awards and other honors—including the Grammy Lifetime Achievement Award, the Rhythm and Blues Music Hall of Fame, the Songwriters Hall of Fame and the Rock and Roll Hall of Fame.

Booker Little, Jr. (April 2, 1938 – October 5, 1961) was an American jazz trumpeter and composer. He appeared on a number of recordings, both as side-man and as leader. Little was closely associated with Max Roach, but also performed with John Coltrane and Eric Dolphy and was strongly influenced by Sonny Rollins and Clifford Brown. He died at age 23.

Little was born in Memphis, Tennessee. He was the fourth child of Booker, a Pullman porter (who was also a trombonist) and his wife, Ophelia (who played piano). Little graduated from Manassas High School. He studied trumpet at the Chicago Conservatory with Joseph Summerhill from 1956 to 1958 and it was during this time that he worked with leading local musicians such as Johnny Griffin. Later, after moving to New York, while he lived with Sonny Rollins, Little became associated with drummer Max Roach and multi-instrumentalist Eric Dolphy, recording with them both as a sideman and a leader.

IC 2177 is a region of nebulosity that lies along the border between the constellations Monoceros and Canis Major. It is a roughly circular H II regioncentered on the Be star HD 53367. This nebula was discovered by Welsh amateur astronomer Isaac Roberts and was described by him as “pretty bright, extremely large, irregularly round, very diffuse.”

The name Seagull Nebula is sometimes applied by amateur astronomers to this emission region, although it more properly includes the neighboring regions of star clusters, dust clouds and reflection nebulae. This latter region includes the open clusters NGC 2335 and NGC 2343. 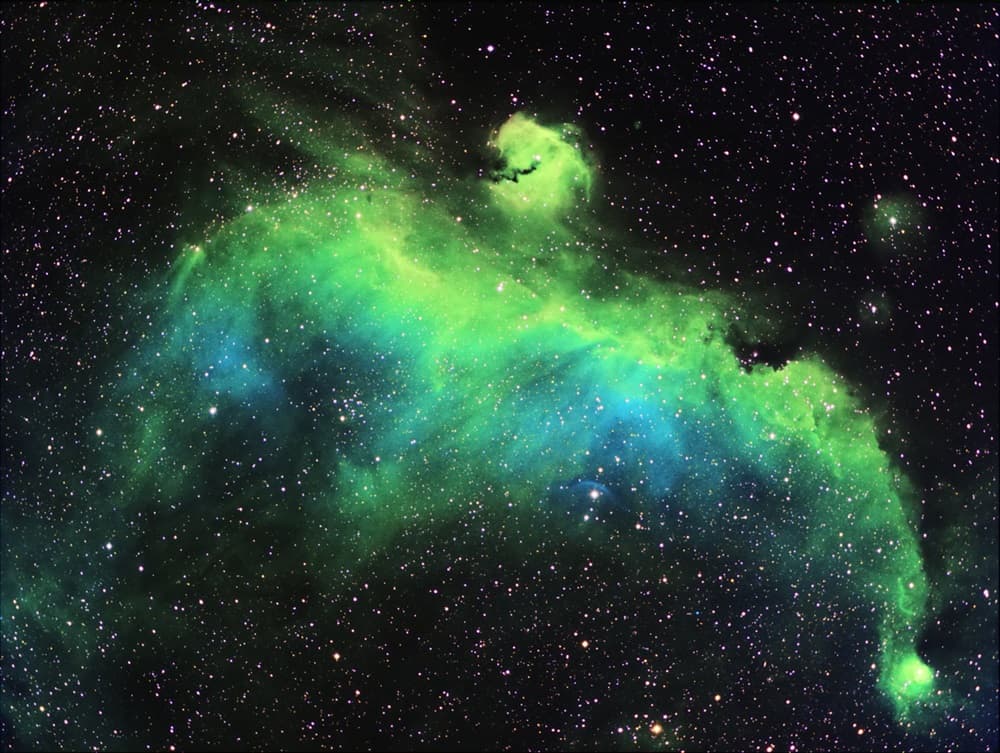 Gilbert “Gil” Scott-Heron (April 1, 1949 – May 27, 2011) was an American soul and jazz poet, musician, and author, known primarily for his work as a spoken-word performer in the 1970s and 1980s. His collaborative efforts with musician Brian Jackson featured a musical fusion of jazz, blues, and soul, as well as lyrical content concerning social and political issues of the time, delivered in both rapping and melismatic vocal styles by Scott-Heron. His own term for himself was “bluesologist”, which he defined as “a scientist who is concerned with the origin of the blues”.

His music, most notably on the albums Pieces of a Man and Winter in America in the early 1970s, influenced and foreshadowed later African-American music genres such as hip hop and neo soul. Scott-Heron is considered by many to be the first rapper/MC ever. His recording work received much critical acclaim, especially one of his best-known compositions, “The Revolution Will Not Be Televised“. AllMusic‘s John Bush called him “one of the most important progenitors of rap music,” stating that “his aggressive, no-nonsense street poetry inspired a legion of intelligent rappers while his engaging songwriting skills placed him square in the R&B charts later in his career.”

Jordan was born in New York and raised in Brooklyn where he attended Boys High School. An imaginative and gifted pianist, Jordan was a regular member of Charlie Parker‘s quintet during 1947–48, which also featured Miles Davis. He participated in Parker’s Dial sessions in late 1947 that produced “Dewey Square”, “Bongo Bop”, “Bird of Paradise”, and the ballad “Embraceable You“. These performances are featured on Charlie Parker on Dial.

Jordan had a long solo career from the mid-1950s onwards, although for a period in the mid-1960s he drove a taxi in New York. After periods accompanying Sonny Stitt and Stan Getz, he performed and recorded in the trio format. His most notable composition, “Jordu“, became a jazz standard when trumpeter Clifford Brown adopted it into his repertoire.

Beginning in 1978 he lived in Copenhagen, Denmark, having recorded an extensive sequence of albums for the SteepleChase label; his first record date for the company was in 1973. He was reported not to have changed his style over the course of his career. Some of his best live recordings are available on SteepleChase, or Marshmallow Records, a Japanese label.

Alberta Hunter (April 1, 1895 – October 17, 1984) was an American jazz singer and songwriter who had a successful career from the early 1920s to the late 1950s, and then stopped performing. After twenty years of working as a nurse, in 1977 Hunter successfully resumed her popular singing career until her death.

Hunter was born in Memphis, Tennessee, to Laura Peterson, who worked as a maid in a Memphis brothel, and Charles Hunter, a Pullman porter. Hunter said she never knew her father. She attended Grant Elementary School, off Auction Street, which she called Auction School, in Memphis. She attended school until around age 15.

Ferro Gaita was founded in 1996 in the city of Praia, the capital of Cape Verde. From the beginning, the band put their own spin on funana, mixing in snare and hand drums, electric bass, and even a conch shell to create a spirited instrumental backing for an upbeat and energetic live show.